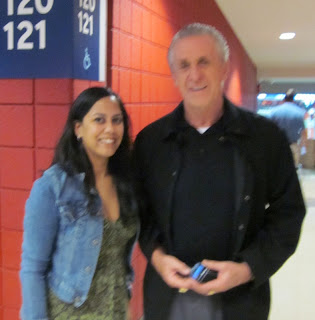 Today I went to the NCAA Tournament in Washington DC and I saw one of my all-time favorites at the Verizon Center .  PAT RILEY.  I'm such a huge fan of the man.  I love everything he does (i.e. Los Angeles Lakers and New York Knicks).  He looks great and his smile is killer.  The man is a WINNER.  Plus, I have a huge crush on Erik Spoelstra (i.e. even before he became head coach), so Riley would be "like" a "father-in-law".  ****  No, I didn't tell Riley, I had a crush on Spoelstra.  To be honest, I forgot ~ plus that just sounds silly!
Regardless, what a great St. Pat(rick's) Riley Day!!!
Shout out to another one of my favorites, Bob Ferry (i.e. former GM of the Washington Bullets/Wizards and the best person to hang out with when a loved one is having surgery on his foot).  Bob Ferry is the BEST.  Nothing but class from the man, and he's another gentleman who I adore seeing.  Great smile, big hug, and nothing but love!
An actual tournament post will come when I settle in a few days ~ but trust me these 2 men were my highlights!