Syracuse cruised into the 3rd round ~ 2011 NCAA 2nd round, Cleveland 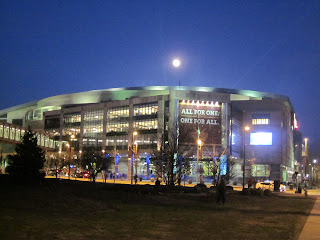 The walk over to Quicken Loans Arena was really cool.  Check out the moon.  I think it was the "start" of a supermoon.  Google it, if you care enough.
The first game of the doubleheader had Marquette battling Xavier.  Since, I'm from Ohio, I was rooting for Xavier.  So much for that. Marquette defeated the Musketeers.
The second game was the game I was most interested in, because I wanted to see Syracuse play. I like watching their 2-3 zone defense, and I wanted to see Scoop Jardine play in person.  Rick Jackson led Jim Boeheim's squad over the Sycamores.  Jackson had 23 points.  Syracuse ended up defeating Indiana State (i.e. final score of 77-60) 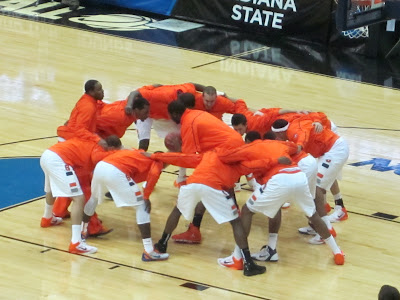