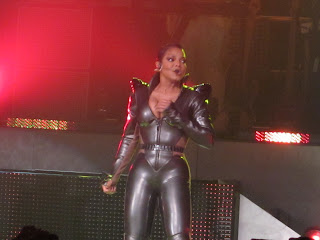 Monday night I was asked if I wanted to see Janet Jackson at Radio City Music Hall.  I was asked around 6PM and I presume her show was at 8.  I would've gone, had I been in New York ~ but I wasn't.
Actually, earlier that day I was looking at Ticketmaster and Stubhub trying to find a GOOD ticket to see Janet Jackson on Tuesday night at DAR Constitution Hall.  Janet had 2 shows scheduled in Washington DC.  One was Tuesday night and the other is Thursday night. 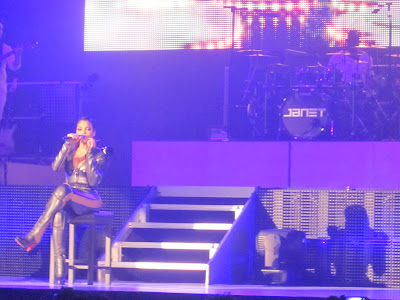 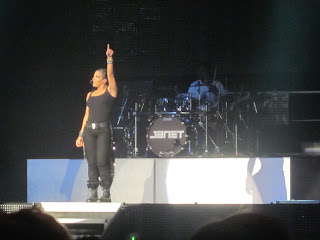 Seeing as though, I'm a huge sports fan, Thursday's concert date isn't going to work (i.e. since the 2011 NCAA Tournament resumes).  As a result, I had to get my game plan together for last night's show.  Since Ticketmaster told me that her Tuesday night show was sold out, and I didn't want to pay any mark-up fees from a ticket re-seller, I thought I'd have to take my chances with a scalper.
Regardless, I wasn't going to miss Janet's #1s Up Close and Personal Tour. I arrived at Constitution Hall around 9:15PM and after running by the scalpers and asking them about their inventory, I walked towards the box office.  "It's sold out," was what the guys kept saying as they tried to sell me their upper level tickets or tickets towards the back on the floor (i.e. for face value).  Suuuuuuuuure.  Sold out.  Little did these guys know, that I knew better. 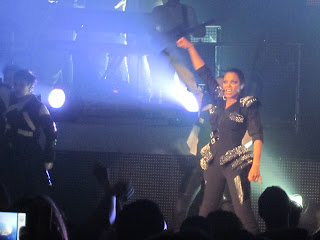 As I talked to the guy at the box office and asked for a ticket, he told me he only had 2 left.  Row AA on the floor (i.e. the first floor in the 2nd group of seats on the floor ~ which translates to the 14th row).  He then also said that he wasn't allowed to split the pair.  That's when the negotiation took place.  I asked him to ask his manager to split the pair.  It was close to 9:30 and Janet was going to come out soon.  We all knew that.  Sure enough, permission was granted and I hustled to my seat!  With an extra seat next to me I was able to spread out and I had plenty of dancing room.  ****  I bought the 2nd to last ticket to the show and I had one of the best seats.  The last ticket was left unsold.  That's how I roll...
I'm Janet's #1 fan and I'm probably one of her largest critics.  I expect to be "wow'd" when she perform and with her latest tour's title, my expectations might have been even higher. 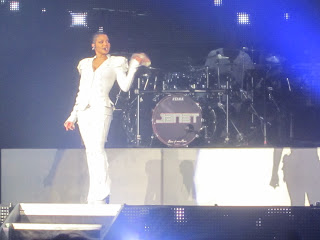 Janet...  Janet...  Janet...  She killed it last night!  I danced and sang my heart out for the 2.25 hours you were on stage.  I enjoyed watching the clips from Good Times, Diff'rent Strokes, Poetic Justice, etc. and seeing the photo montages from her extensive career.  ****  Janet even put on the screen a picture of Michael and her when they were kids, and the crowd went wild.
Throughout the show, I scanned the crowd and was thrilled to see that people in the crowd still knew how to do the Rhythm Nation dance and some of Janet's other signature moves.  I thoroughly enjoyed the show and strolled down memory lane as she performed her older hits (i.e. Miss you Much and Alright).  Alright is still one of my all-time favorites and she performed the entire song!  ****  She did not perform Black Cat.  That omission made me happy, since I'm not a fan of that track. 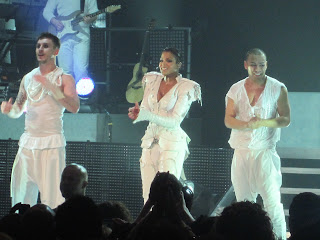 I'm used to Janet performing at larger arenas (e.g. Verizon Center, Izod Center), but I like the feel of the smaller venue.  If Janet was standing, the crowd was standing.  The crowd only sat when she sat and sang her ballads.  Gone was the huge set and stage backgrounds.  Instead, the crowd had a more "Up Close and Personal" experience complete with her signature choreography.  ****  I didn't count, but I think she had about 6 back up dancers. 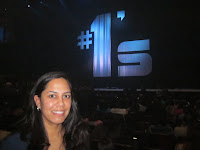 As someone who's seen Janet in concert at least 5 other times and wasn't overly impressed with her last tour, I have to say that last night was an excellent show.  The concert was definitely worth the price of admission.  Actually, I'm thinking about going on Thursday or Saturday in Atlantic City at the Borgata (i.e. in between the 2011 NCAA Tournament sessions).  I told you I was a fan!!!  If you want to get your ticket(s) to see Janet, here's the link:  http://www.ticketmaster.com/search?tm_link=tm_homeA_header_search&q=janet+jackson

For a taste of what you'll see at the show, here's some video I shot...