And now it's on my TV... Still waiting on Zydrunas to get bought out... 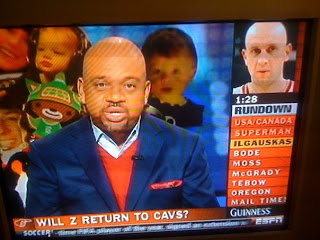 It's like this...  Earlier, the LA Times was reporting that the NBA will try to block Zydrunas from returning to the Cavs.  According to some source the LA Times had, the NBA believes/believed there to be a previous deal in place ~ similar to the Stackhouse, Payton deals before, that would return Zydrunas to Cleveland.  From what I've read, Phil Jackson and Doc Rivers have voiced their feelings about it and don't want the Cavs to get Big Z back.  Duh.  If I were the Lakers or the Celtics, I wouldn't want the Cavs to get a legitimate backup center.  I wouldn't want a 7'3" man in the middle who's willing to pick up 6 fouls.

Actually, now that I think about it, I remember playing basketball with Zydrunas (i.e. when we first started dating) and he wouldn't even let ME drive to the basket for a lay-up.  I literally bounced off of his chest and almost hit the ground.  He told ME that there were "no easy baskets"...  SERIOUSLY!?!?  This is a man that does not like to lose.

According to Herb (Zydrunas' agent) there is/was no such deal in place and the buyout should "hopefully" occur today or tomorrow.  The Wiz are well under the threshold, so they have some significant leverage.  I guess if I were the Wizards, I'd try to give Zydrunas pennies on the dollar (e.g. 4% ~ hahahahahahaha) since they (i.e. like most of the free world) "know" that he doesn't want to be here and wants to go "home"...  Another strategy, I guess the Wizards could employ is to "drag their feet" and see if the Cavs self-correct like they say they will.  Admittedly, I'm curious to see if they will (i.e. I'm a doubter).

Anyway...  Still waiting on the buyout to be completed.  A loophole is a loophole ~ fix it in the new CBA.  This is not the time to make an example out of anyone.

Email ThisBlogThis!Share to TwitterShare to FacebookShare to Pinterest
Labels: Cleveland Cavs, The Wirk