This year's Super Bowl was historic.  The Saints won it all in their 44th year as a franchise in Super Bowl XLIV (i.e. the 44th Super Bowl for those of you that are Roman numerically challenged).  This year's NBA All-Star game was also historic.  It was slated to draw a world record in attendance for a basketball game, since it was being played in the New Dallas Cowboys Stadium. 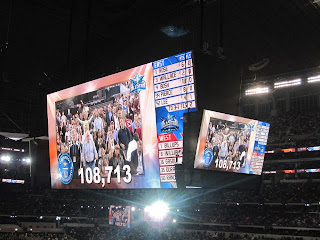 New Guinness Book of World Records achievement in attendance for a basketball game
I was thrilled to be going to the game, even though I'd been to the new stadium earlier this year for the Eagles v Cowboys playoff game.  You knew that already, right?!!?   No?!?!  Well you would have, had you been following this blog since Day 1.  Just saying...  :-P

For those of you, who are curious ~ and you know that you all are.  Here is some video I found on youtube that shows how the floor of the new Cowboys Stadium was transformed to accommodate the 2010 NBA All-Star game.  It's AWESOME.

The NBA transportation took us to the arena easily.  There was a long line for people to get into the arena.  Fortunately for me, I didn't have to wait in that line...  Inside the stadium, I couldn't wait to see the setup for the basketball game.  A quick trip across the concourse and this was the view that I saw. 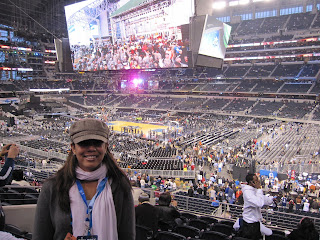 After sizing up the arena and looking at the seating differences for basketball, I descended into the tunnels and was able to take in the scene prior to the player introductions.  Kobe Bryant wasn't playing the game, but he was in the tunnels. 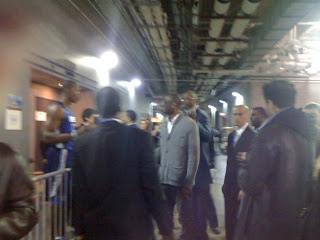 Kobe Bryant talking to Dwight Howard
After that scene got tiresome, I walked through the tunnels and went towards the floor of the stadium and took in the scene at "field level". I couldn't believe I was so close to the action and the energy of the stadium was palpable.  People were excited and you could feel it!  More Kobe interviews were conducted, while  Reggie Miller and Marv Albert were doing their pregame show segments.
Usher performed 2 or 3 songs prior to the player introductions.  Does anyone know if Usher still has an ownership stake in Cleveland?  Just curious.  Next question: Is Usher still relevant?  I don't think he is, but that's my 2 cents... 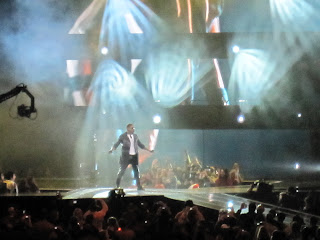 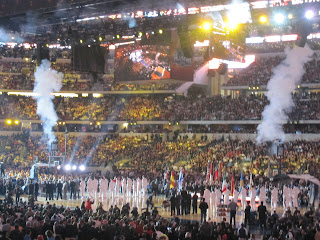 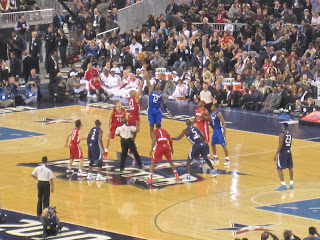 Opening tip
It's the NBA All-Star game.  I've watched many of these through the years and the "formula" is the same.  The players have fun for the first 3.75 quarters and begin to play for the win towards the end of the game.  During the 1st half of the game, I scanned the crowd and enjoyed the action on the court.  At half time, I was curious to see how the crowd would be managed as the players traveled what I'd like to refer to as "Lombard Street" at the new Cowboys Stadium...  For those of you that don't know what that means, I beg you to travel to San Francisco and the curves of "Lombard Street" for yourself. 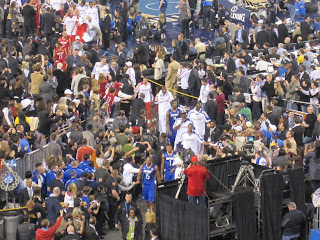 The path the players had to walk reminded me of the game Centipede...
Shakira and Alicia Keys performed at half-time.  My only complaint was about Shakira's outfit, since it was a cross between Beyonce's "Single Ladies" leotard and Lady Gaga's outfits with the "shoulder embellishments"...  All of them look great ~ but come on....  Can we please get some originality ladies?!?! 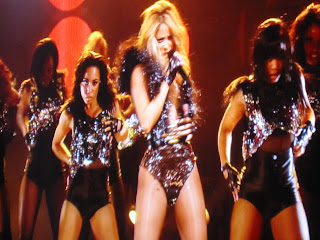 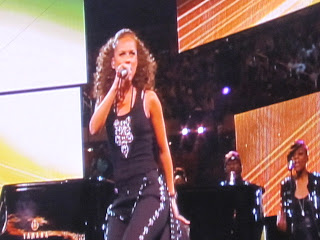 Alicia Keys
Also, at half-time, the USA Basketball team was presented to the crowd.  The 2010 FIBA World Championships are being held in Turkey this September.  27 marquee names on the roster include:  LeBron James, Kobe Bryant, and Dwyane Wade, etc.  For all of you Duke fans, I'm sure you'll be happy to know that the USA head coach is Mike Krzyzewski. 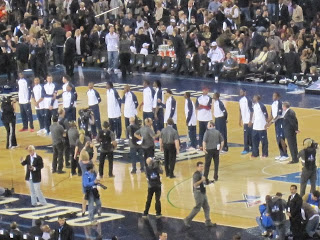 Some of the members of Team USA
With under 40 seconds left in the game, the score was tied at 137.  This made some people nervous, because not many people wanted this game to go into overtime.  Eventually the East won the game 141-139 and Dwyane Wade was named the MVP of the game.
As the stadium cleared, I took some more pics around the stadium and watched the taping of Inside the NBA. 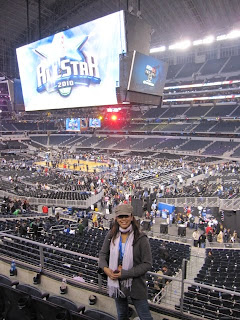 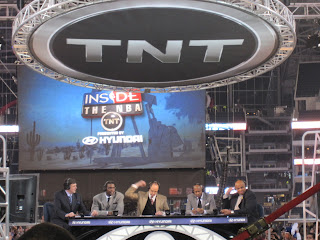 Kevin McHale, Chris Webber, Ernie Johnson, Kenny Smith, and Charles Barkley
After the Inside the NBA was done taping, here are some gems that I was able to snap. 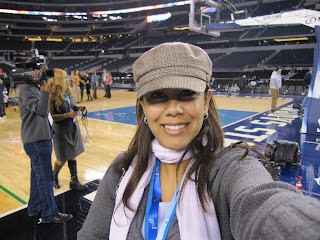 On the actual game court 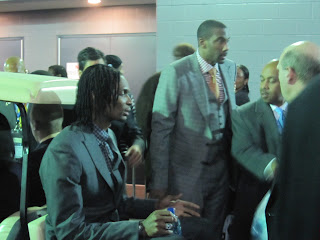 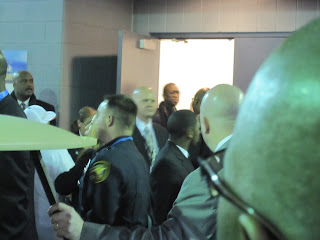 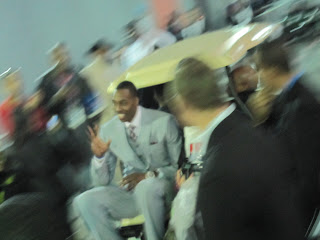 Dwight Howard leaving the stadium
By the time we all left the arena, it was LATE.  I ended up chatting it up with PR and media people from all over the country.  Ever sat in front of someone who's written about you in a newspaper and he not know who you were?  I have and it's a very strange feeling.
NBA ~ Where amazing happens!
THE WIRK
Posted by THE WIRK at 5:40 PM