It's Monday and I'm still in Dallas.  QUICK recap below of Friday...

Friday night, My friend, Teri and I went to the ESPN party.  It was at the Ghostbar at the W and a good time.  DJ Rashida (i.e. Prince's DJ from his days at 3121 at the Rio in Vegas and resident DJ for America's Best Dance Crew) was spinning, the Nike MVPuppet commercials were playing on the screens, and there were video game consoles positioned throughout the space, so that people could match-up and play one of the NBA games...

It was a great time to mix with old friends and meet new people.  Everyone was happy and enjoying the good time.


At the end of the night, Lebron and his crew made it to the party.  My first clue that Lebron was there was that I saw his mom, Gloria, walk past me.  I've seen Gloria soo many times this weekend, I'm beginning to think she's my family too!  It was after 2AM, and the party was wrapping up ~ but Lebron made his appearance and was playing the video game and re-enacting the 2009 NBA Finals match up between the Orlando Magic v Los Angeles Lakers.  As soon as that game ended, he and his crew left and the party was over.

At events like this, some people expect me to come back with TONS of pics.  The issue is that, that is simply not possible and will never happen.  I normally keep my camera in my purse (i.e. it's much easier to take a picture when you're farther away from a person, as opposed to right next to someone), but on Friday night I was actually ASKED to snap a few pics, since the photographer had left for the night.

Here's one of the 3 pics, that I took, for your enjoyment. 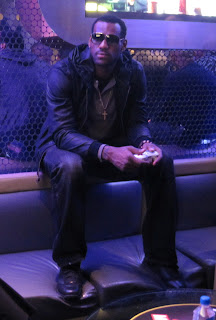 After the party, my crew and I headed back to our hotels.  In the car we began a lively discussion as to how we'd need to line up Spike Lee, Gary Coleman, Emmanuel Lewis, and Wesley Snipes if we wanted to go from tallest to shortest...  Ouch...
That was Friday...  I'm sure I'm forgetting some folks, since I'm intentionally leaving out some others...  :-P
THE WIRK
Posted by THE WIRK at 6:22 PM