Hmmm...  What happened on Saturday...  Well, I can tell you what I didn't do much of on Saturday ~ EAT.  I barely at anything.  I risked starvation and lived to tell.  I am, my own hero.

We ended up at the players' hotel, and once we were able to get through the lobby (i.e. not an easy task without the proper credentials and stamps) that's where I spent most of the afternoon chatting it up with anyone and everyone.

Incidentally, I was the only person "interested" (i.e. I use the term "interested" VERY loosely) in the Dayton v St. Louis men's basketball game that was being shown on one of the walls.  Unfortunately, the UD Flyers gave up a HUGE lead and St. Louis won.

Running around the hotel from office to office, I eventually came across Chris Kaman and immediately recognized a likeness in appearance to Zydrunas Ilgauskas...  As far as I'm concerned, cutting his hair short is the BEST thing Chris Kaman could've done for himself.  Some people would argue that improving his game was the best thing he could've done for his career.  I disagree.  Am I the ONLY person who remembers what he looked like with his stringy locks flowing and bouncing up and down as he ran the court?  Ewww...  Aesthetics are important to me.  His hairdresser gets my vote for MVP.

I also saw Kevin Durant, and he was carrying a McDonald's bag.  I'm not going to lie, but I almost jumped him for his food.  Seriously...  David Stern would've had to replace KD on the roster, if I hadn't exercised self-control.

My friend and I eventually rolled out and went with one of her girls to an event for Kenyon Martin's foundation.  It was at the modern, furniture store Cantoni, which is located closer to the Galleria.  That reminds me ~ if you see me, ask me to tell you the Galleria rumor I heard...  OK - back to my story.  My friend is friends with Kenyon from the days when she used to work for the Nuggets.  I remember watching Kenyon when he played for the University of Cincinnati.  All I can say is Kenyon Martin is the BEST, since he had food ~ and I FINALLY had a chance to eat.  Thank you, Kenyon, for the hospitality and the grub.  You saved my life!!!

My friend and I make it back to the hotel and barely have time to catch our breath before we hit NBA All-Star Saturday night for the 3-point challenge, Slam Dunk, etc.  I meet Charles Smith (President of the NBA Retired Player's Association and one of the sources of my NY Knick broken heart) and Dale Ellis (I remember him as a Seattle Supersonic).  Charles Smith is tall.  I know tall.  BUT, for some reason Charles looks really tall.  The only thing I can think of is that it's because he's leaner than most of the NBA Players both active and retired.  I shook his hand and told him I was a huge fan.  This was not the time to bring up the bunny shots that he missed years ago...  He replied that my comments were showing my age.  Great reply.  Dale mentioned he lived in Atlanta and we started to chat it up about the city, before I got called to run to the bus to the arena, run towards the bus, and abandon the Dale and the conversation.

We get to the American Airlines Center and who do we see on the concourse?  Ron Harper.  Quick "hello", and we sort of keep it moving.  Dikembe Mutombo walks by.  John Barry and Mike Breen walk by.  Who really needs a ticket?  If you're restless or have a bad ticket, hang on the concourse and you'll see all kinds of people.  Lucky for me, I had a good ticket. 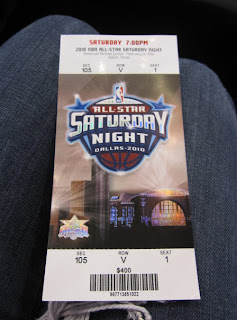 I make it to my seat and survey the crowd.  It looks full, but it's a bit quiet.  Looks like I'm just in time for the 3 point contest.  I survey the seating by the court and notice Bill Russell is there.  Immediately, I'm reminded that he didn't stop when I saw him at Dulles and asked to have my picture taken with him.  I guess he's like that ~ but you still MUST respect his talent and all that he's achieved. 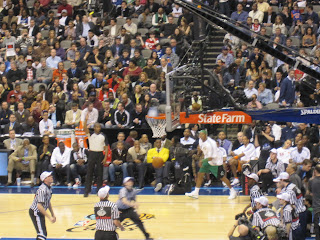 During one of the TV breaks, the Bulls' mascot was dancing to Beyonce's "Single Ladies" song, right in front of Jay-Z.  He wasn't amused, but the crowd was. 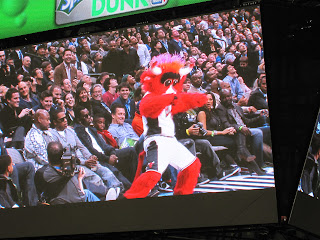 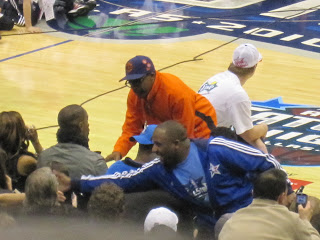 Spike Lee and Jamie Foxx
Paul Pierce won the 3 point contest and Nate Robinson won the Slam Dunk contest. Let's just put it out there. I recommend that they cancel the Slam Dunk contest until there's someone/something worth seeing. No offense to Nate ~ seriously, congratulations on the win ~ but many of the competitors dunks were boring. I would've loved to have seen Dominique Wilkins and Spudd Webb hold up a 5 for some of the dunks that were performed. Where was the showmanship and creativity?!?! Just like in schools, the Slam Dunk contest is suffering from "Grade Inflation". When are the judges going to stop giving away A's and B's?!?! Admittedly, I've never dunked ~ but I remember the greatness that I USED to see on TV.
After the Slam Dunk contest we headed back to the hotel to get ready for the NBPA party (i.e. the Players party) which was held at the player's hotel.
On the bus back to the hotel my friend and I were sitting behind Satch Sanders.  Do you know who he is?  I didn't.  She introduced me to him and he was very friendly.  Check out the following link...  The man is ACCOMPLISHED...  Only his teammates, Bill Russell and Sam Jones, have won more than his 8 Championship rings.  The man is a legend!  http://www.nba.com/celtics/history/WhereAreThey_Satch.html 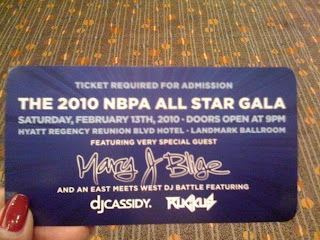 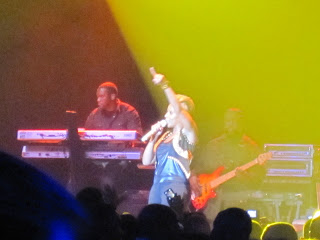 Mary J Blige
I've seen Mary J Blige perform before, but I was excited to see her again. We passed, yet another challenge to get through the lobby and with another handstamp for me we were on our way. I saw Domnique Wilkins, Dale Ellis, Dikembe Mutombo, Chris Webber, etc. Ever see a 7 footer try to hide in a crowd?!?! It's hilarious. Poor Dikembe was trying to dodge every picture taker he could find. Enough was a enough, I guess.
Two things that were notable at the party.
1 - Question: What happens when there are about 10 girls sitting on a pool table and 8 of them get up?!?  Answer:  The corner with the other 2 people left sitting buckles and the foundation cracks.
2 - Question:  What happens when you don't have enough people working coat check and a HUGE party empties out and there is/are no line(s) established?  ANSWER:  A borderline riot.

A borderline riot.  Don't believe me?  Believe THIS.  Sooooooo, there was such a scene at coat check that the Dallas Police Department started yelling at people to back up, the hotel employees had to try to set up velvet ropes to simulate a line, and then some of the police/security began to acually take tickets and retrieve coats.  The coat check people were taking pictures of the crowd, and I'm sure some of them were filming it.  I should check youtube.com.... 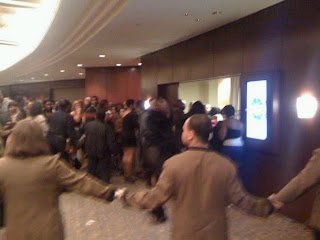 Once order was restored
OK - That's all I can recall about Saturday...  Saturday ~ the LONGEST day of the NBA All-Star Weekend...

Oh, one last thing ~ check out who I ran into after the players' party...  Too bad he didn't have any McDonald's on him that time.... 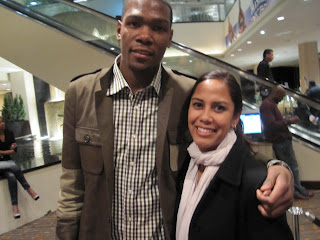