Can we all agree now that the Cavs don't need to be afraid of the Celtics?

Yesterday, I received a message from a friend who asked me what I thought about him betting the Celtics +2.5 v the Cavs.  Paul Pierce was going to be out, and the Celtics were at home.  The person, who sent me the email, mentioned that he'd just watched a game where the Cavs didn't play much defense and were hoisting 3 points shot, etc.  To be honest, I hadn't caught the last couple of Cavs games (i.e. or maybe I had, and just don't remember them).  Anyway, since I hadn't "seen" the last couple of games, I told my friend he'd probably be OK. However, I added the caveat, that I didn't like "betting againt Lebron".  ***I've been catching plenty of games (i.e. college and pro) lately on TV, and they're all beginning to swim in my head.  I'm almost to the point where I want to start traveling again, so I can experience something "new" and hopefully more memorable.

So here's what happened.  Yesterday, I went to a Women in Sports Media Panel event; and therefore, missed the first half of the game.  However, I managed to get out and catch most of the 2nd half of the Cavs v Celtics match-up.  I actually figured that the Cavs would start out hot and have a huge lead v the Celtics, and that the Celtics would rally back on their homecourt for the win.  Why?  Because the Cavs haven't won on the Celtics' homecourt in their last 9 tries...  I checked out the play-by-play summary, and it turns out that my assumption was correct, INITIALLY...  Why "initially"?  Well, by the time I planted myself in front of the TV and looked at the score in the 3rd Q, it was a relatively close game (i.e. working off memory it was 78-77, I think ~ but exact numbers aren't important here).

At around the 9 minute mark in the 4th Quarter it looked as though, my initial guess would be incorrect.  The Cavs kicked into gear and started SCORING.  The Celtics might as well have sat on the bench and watched as the Cavs surged, since the scoring was so one-sided.  In that final quarter, Mo Williams made four 3-pointers, and the Cavs BLEW OUT the Celtics 35-14.  Yes, you read those numbers correctly.  Wow!  Can you imagine the feeling on the Celtics bench and the feeling in the hearts of all the Celtics' fans out there?  I can only imagine what Bill Simmon's tweeted during the game...  ***Just went to my Twitter and it looks like Bill was surprisingly quiet.  Also, "Thank you," to everyone who contacted me regarding my Twitter account getting hacked last night.  I'm not promoting the use of Viagra, but if it works for you and you're happy ~ "YOU'RE WELCOME".

Final score of the game was 108-88, and the Cavs finally won a home game in Boston.  Boston, I actually still need to hit that venue...  ***Remember, I'm trying to hit a home game for every professional basketball, baseball, and football team.  I'm up to 59 venues, right now.  The last time I saw the Celtics in town (i.e. verses the Wizards earlier this month), Paul Pierce went to the floor injured and Kevin Garnett was playing in one of his first games back, since he was coming off of an injury.  Everyone in my sports and social circles were telling me that as a Cavs fan, I needed to be scared of the Celtics.  Well, I've said it many times before and I'll reiterate it now.  The Celtics are "old", not  healthy, and not to be feared.  Last night's performance is further evidence that the Cavs should only be concerned with Orlando in the East.

Speaking of Orlando...  The main reason Cleveland picked up Shaq this season, was to add a large presence and be able to give up 6 quality fouls when the Cavs go against Dwight Howard in the playoffs.  Shaq left the game last night with an injury to his right thumb.  Did you see the video?  Why did "Big Baby" Davis challenge Shaq to a "Thumb War"?!?!?  Aren't they both LSU alumni, so can't there be some level of respect?  Lol.  Who knew "Mean/Bad Baby" Davis played a little dirty?  Anyway...  With an injury to Shaq, and Zydrunas not re-signed yet ~ the Cavs are vulnerable in the middle and must rely on Varejao's defensive play.  It's no secret that I'm not a fan of Varejao's basketball skills...  I must give credit where credit is due, and Varejao did play well last night.  However, I continue to keep my finger's crossed EVERY TIME he steps on the court, and pray that he doesn't become a liability and ruin the Cavs' (i.e. and MY) dreams of an NBA Championship. 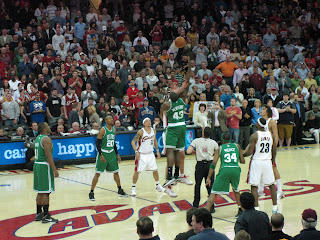 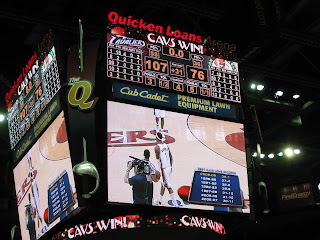 But even, then the Cavs blew the Celtics out...
Go Cavs!!!