Yesterday I was up late trying to figure out a plan to head to Vancouver for the Winter Olympics.  So last night, I started taking a closer look at it all.  I could do flight easily (i.e. I have a magic chest of airline miles), event tickets were more than reasonable (i.e. I was looking at trying to do hockey all day on Wednesday - yes, Wednesday - yes, TOMORROW), and from what I heard it'd be very easy to walk to Canada Hockey Place based on the hotel recommended to me.

The major reason why I'm not going to Vancouver tomorrow morning is hotel.  Hotels are ridiculously expensive out there now and it's tough to justify that kind of expense for something I'm moderately interested in.  I'm interested in checking out the Olympics, but not $500/night interested and I don't want a cheaper hotel that's farther out and then to have to fool w/transportation.  Normally I'd say forget the hotel, stay out "all" night and then hop the plane the following morning.  However, this is Vancouver ~ a city that I've never been to ~ so, flying there for one day for the Olympics seems silly.

Some random thoughts about the Olympics and before any of my readers leave me notes/texts/comments/voicemails, I want to admit that I know nothing about these events.  I'm a CASUAL Winter Olympics sportsfan. 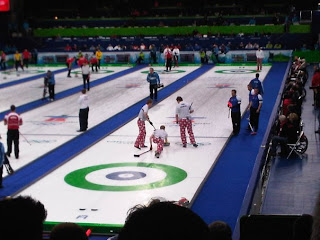 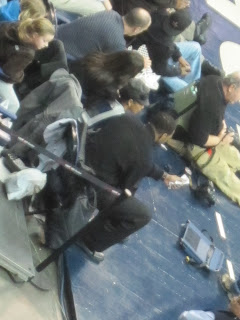 T-Mac sitting baseline
Maybe you and/or T-Mac can sit in a NY Knick DreamSeat...
That's all I have.
THE WIRK
Posted by THE WIRK at 8:28 PM