Yesterday I went to Super Bowl XLIV...  It was my first Super Bowl ever.  Notice, I said "first", which implies maybe there's a "second" or a "third", etc.  You never know..  I could score another ticket and go again...  As long as I'm breathing, there's always a chance! 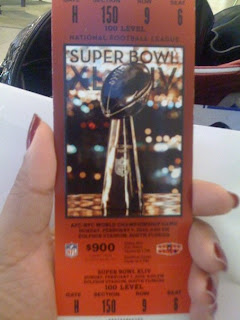 Transportation to Sun Life Stadium was provided.  We meet up with a group of guys and we're off to the stadium ~ we probably left close to 1:30 and were parked by about 3.  Plenty of time to check out the scene, take a few pics outside, buy a program, get some grub, and sit in the seats to take in the whole experience.  My brother has been to the Super Bowl before.  He lives in South Beach.    Soooo, guess who got to go also?!?!  This girl!!!!  I've been a Colts fan since 2002, when I dated Jason.  Jason and I met when I lived in Atlanta.  He was from Indiana and a huge Colts fan, and I ended up falling in love with the team and having such a great time at the RCA Dome  and in Indy a few times a year, that I adopted the team also.  I went with Jason and his friends to the AFC Championship game in 2004, and saw the Colts lose to the Patriots at Gillette...  Yes, this is serious and I told you I was a Colts fan...

I didn't go to the Super Bowl 3 years ago.  I didn't see Prince and watch the Colts win it all.  Have you ever looked at ticket prices for the Super Bowl?!?!!?  Wow.  They definitely make it tough for the gen pop (i.e. general population = those of us without agents, grammys, oscars, guaranteed contracts, etc.) to get into the stadium!  This was going to be my year.

I started chronicling this year's football travels, in this blog, with my trip to the new Cowboys Stadium and then subsequently stopped off in Indy and Minneapolis on my way to the Super Bowl.  Incidentally, I hit Heinz Field earlier this year also.  Obviously I kept up with the NFL season, but I skipped traveling to the AFC and NFC Championship games.  I was exhausted from the travels the week before.  Lucky for me, early last week my brother sent me an email asking me what was better: (a) lowers in the corner or (b) uppers in the center...  The answer for me was obvious ~ lowers in the corner as long as corner didn't translate to "endzone".  Sure enough, he was asking, since one of those tickets would be mine!!!

On the "coach" to the stadium, we hear about an auction the night before at the Hard Rock in Laudy and that there were a couple of tickets to the Grammy's and a Grammy's after party up for bid.  I love my brother, because he thought the same thing I did.  We both asked if the guy had another pair of tickets.  The guy makes a call and leaves a voicemail.  So now, we wait...  Seriously ~ how cool would it be to go to the Grammys?!?!

Around the stadium, I was so excited to see more people in Colts' blue walking towards the building.  In the security line it seemed like the Saints to Colts fan ratio was about 5:1.  I have no idea why I had a pack of about 6 Jets fans (in Jets jerseys) to my right.  Carlos, a Jets fan, was cool though...  Oh well ~ to each their own.  Security was tight ~ bags bigger than 12X12 inches weren't permitted.  My Dior made it through.  I don't even want to get into what sort of scene would've occurred if my bag had to stay out. There would've been a problem... 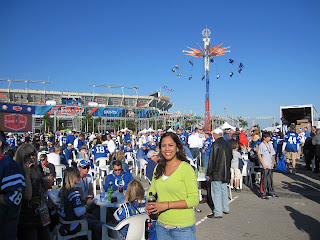 They have rides at the Super Bowl!
On the concourse for $22 you could have a Cuban sandwich and for about the same price you can have some freshly cooked paella.  I found that interesting ~ loved the fact they featured local food, but seriously, $22 <-- really?!!?  The Saints fan in front of my brother had the paella (which looked AMAZING) and then proceeded to fall asleep for the 1st HALF of the game!  I couldn't believe it.  LOL.  It's almost as if he knew that his team would have very little for him to see in the 1st half!  His buddy said his friend hadn't slept in 2 days.  I believe it.  It'd been a party in South Beach the past few days, regardless if you went to a star-studded party or not!

Steve Winwod's performance at the Tailgate Party was being broadcast in the stadium.  I'm actually not sure if he sang anything except for "Higher Love".  Emmit Smith was getting his picture taken with the Zebras before the game.  Queen Latifah sang "America the Beautiful".  Carrie Underwood sang the "National Anthem".  Ashton Kutcher was with Demi Moore on the Colts' sideline and he was shooting pictures ~ perhaps it was another Nikon add in the making... 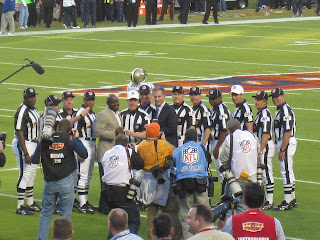 Emmit Smith with the Zebras 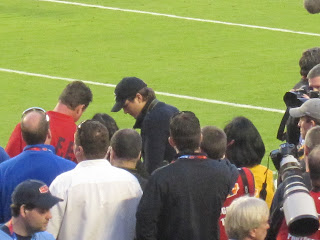 Ashton Kutcher next to Demi Moore
Did I mentioned that our seats were amazing?!?!!  Row 9. 9...  Yes, I said 9. The seats were in the Lower Level.  Santa Claus came early this year!!!  The seats were just perfect.  Free and perfect.  I couldn't have been happier.  It was a little cooler temperature wise, but there was no rain ~ excellent, fall football type weather! 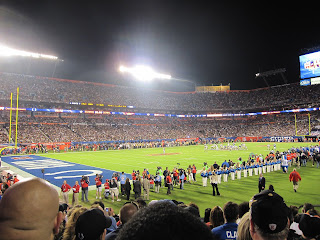 The teams were warming up and I noticed Freeney was in uniform and running through some drills.  That was reassuring.  Everyone on the Colts looked loose, but focused. 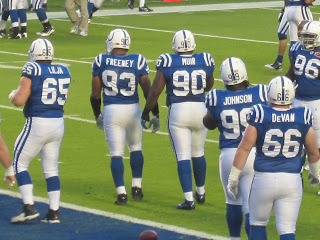 Freeney was ready to play
Coin toss - Saints won it.

Game started and it looked like the Colts would have the game.  "3 and Out" described the Saints' performance.  The Saints finally had a first down and the place erupted.  Very little trash talking was going on.  People were focused on the game and let's face it, the game was a tight one.  At the half, the score was 10-6.  Colts had the lead, but there was a noticeable/palpable lack of ease on behalf of Colts fans.  Where was the expected Colts scoring surge?!?!  Shouldn't we have at least another touchdown?!?!  Did I miss something? 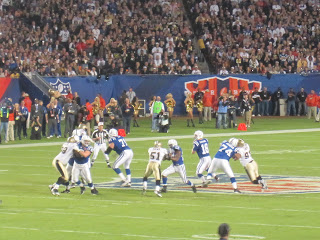 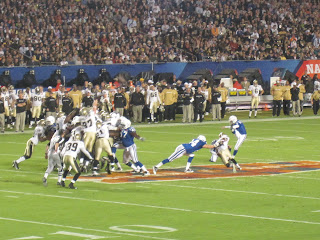 The extra point was good! 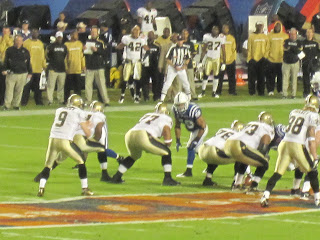 Saints offense
I saw myself on the jumbotron twice during the 2nd Quarter.  That was pretty cool and the exact reason why I own that lime green sweater!  Haha.

The Who came out at the half and did their thing.  I recognized a few of their songs, but I didn't do the cell phone movements that were broadcast on the screen so that the crowd could participate in their performance.  For those of you, who see me, I'll demonstrate the moves if you want ~ but trust me, they're not that special.  The performance was good ~ but, it was no Prince... 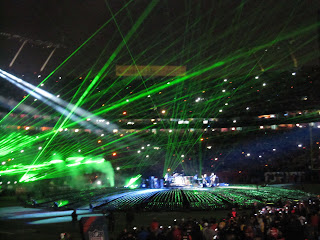 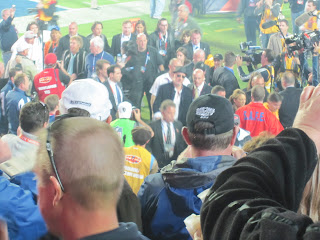 The Who up close.
At the start of the 2nd half, if you have a TV, you already know what happened.  The Saints' trick play...  Sean Payton was a genius ~ ONLY because the play worked.  If it would've failed and the Saints had lost, I'm sure he would be crucified all day long and there'd be a joke about him that would be told every year.  I could've sworn that onside kick was a mistake by the Saints' team ~ I didn't expect it.  From the looks of the replay, neither did Hank Baskett since the ball bounced off of his helmet.  @#$%@$#@#@!#   For all you ladies, out there ~ Hank is married to former Playboy Playmate, Kendra.  Among other credits, she was featured in the Girls Next Door show on E.

Were my eyes deceiving me, but I swear I saw Matt Stover miss a field goal in the 4th Quarter.  $#%^$%#$@#  I watched the 4th Quarter with such a sense of urgency, and yet I felt hollow.  It was almost as if the Saints had deflated me.  Unbelievable. Yet I still thought that the Colts were still "in it" since we were driving and had a little more than 3.5 mins left in the game.  With a little more than 3.5 mins in the game, and a Saint's player down on the field, I decided I could run up the steps to the bathroom and make it back before play resumed.  Yes, I have tiny tanks.  Believe it or not, I did make it back in time.  I made it back in time to watch Tracy Porter pick off Peyton Manning's throw to Reggie Wayne.  I turned my back, and when I got back I witnessed a "Pick 6" that resulted in a 74 yard return for a TOUCHDOWN...  &^%^%#$@$#!@!

For those of you trivia buffs ~ Porter is also the guy that picked off Brett Favre in the NFC Championship game.  I'll never forger that guy's name.  Did you know he's from Louisiana, but went to Indiana?  Neither did I... 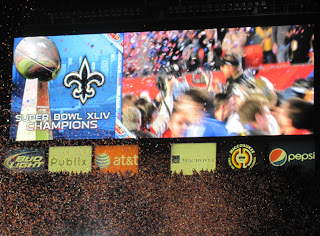 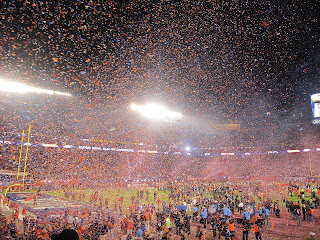 Now THAT'S a lot of confetti!
The final score was 31 to 17.  The score doesn't tell the story, but it's all that most people will remember.  At the end of the game I think I was just trying to take it all in...  "I'm sorry," my brother said.  What's there to be sorry about?  Sure, I wanted the Colts to win.  Yes, I was bummed about the outcome ~ but I was able to go from "start to finish" more or less with a Super Bowl weekend and experience.  I saw the Saits' franchise win their first Super Bowl ever.  And even though, they lost ~ I can say that I saw my Colts in the Super Bowl...  Not many people can say that.  And I did it for FREE, so even though the Saints knocked the wind right out of me ~ I'm gonna be just fine!

My phone died right after the game.  I think it was the ATT&T gods trying to save me, so I wouldn't "lose it" as all my friends who were Saints fans started blowing up my phone.  I get a text from a friend that he's headed to LIV at the Fountainebleau.  I was not going to go.  I had nothing to celebrate and I was mentally exhausted.  My brother and I went for a slice of pizza as we headed back to his car.

I got home and my friend Jack who's also watching Sportscenter starts blasting texts to me about points he wants me to include in this blog.  Jack is a Redskins fan, but let's not hold that against him.  He does make some points that I agree with and one that I'll take his word for.

I'm watching TV now and it turns out the TV rating for Super Bowl XLIV surpassed the numbers for the final episode of "Mash".  Yes, I witnessed history...  Thank you!  Thank you!!  Thank you!!!  :-P 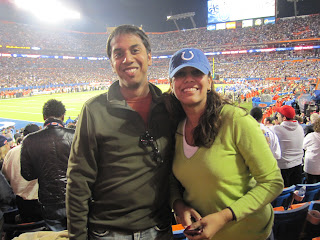 My brother and I after the game
THE WIRK
Posted by THE WIRK at 3:11 PM