Twas the Thursday before the Super Bowl in South Beach...

Eased into the day today and headed over to 12th and Ocean to meet some friends of mine for lunch.  This intersection is very close to where you can walk to the ESPN, ESPN Radio, NFL network, CBS Early Morning show sets etc.  Part of Ocean Drive is blocked to traffic, and the atmosphere was similar to a tame Bourbon Street...  People are walking around in their favorite teams' attire and soaking in the experience.  Sponsorship is everywhere on the street, and the most noticeable sponsor is Tide (i.e. aside from the huge Pepsi sound stage)...

Saw Sean Merriman walking off the set when I got to the meeting spot.  I didn't know who he was, until my friend told me.  Yeah ~ it's football.  Unless you're wearing a jersey and actually playing on the field during game day ~ I probably won't recognize you.  I guess that's how it is for all helmeted athletes, now that I think about it.  I didn't recognize Mike Modano (i.e. Dallas Stars) either when he came over to chat with members of the crew I was with when I was in Miami for the NBA Finals, in 2006.

Lunched at The Tides with friends and took in the scene.  The weather was comfortable, not too hot and not too cold.  It was actually perfect.

After lunch we went back to the ESPN set to watch part of the Pardon the Interruption taping.  We missed the taping of the Deion segment, but c'est la vie.  Watching the taping got a little boring so went to check out the other production tents, but there seemed to be nothing going on at the NFL Network and other ESPN set.  We went to watch the rest of the PTI taping from inside the gate and behind the set, and I was introduced to J.A. Adande. 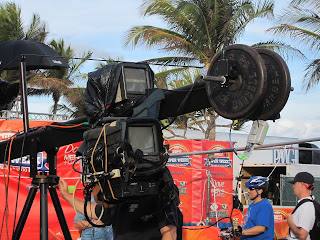 I found the equipement interesting... 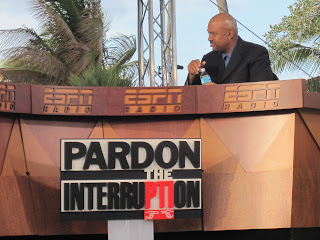 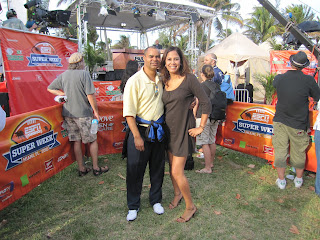 Catching up with Brian, while our friend works...
Taping finished and we all rolled back to get some drinks, kill time, and catch up before everyone disbanded ~ some had to go to dinner, clean up, and/or wanted to catch other games on tv before going out "for real".  It's only Thursday and some of us just got to town, so we're still settling into the scene.

Incidentally, we were talking music, and I've determined that Norah Jones is the female James Taylor.

I ran into the guys from the plane last night, walking on Ocean Drive, on my way back to my brother's place.  Very random.

The NFL Commissioner's party is tomorrow night in Laudy and I'll be there.
For all you gamblers out there, I got a text from my friend that the line moved to Indy -4.5...  I like the Colts even more now..  My guess is that it moved because people are scared that Freeney won't play and money started moving to the Saints...

I'm hungry...  Off to dinner ~ Argentinian steakhouse ~ LOOK OUT :-P