I didn't watch the Oscars, but I'd like to see an actual award... 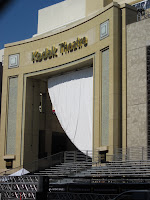 Last night the Oscars were held at the Kodak Theatre, and I couldn't have cared less.  I saw that Hollywood was setting up for the awards show 2 weeks ago when I was in California for the NBA All-Star festivities.  Believe it or not, I actually thought the stands that were set up were for the Kobe Bryant event at Grauman's Chinese Theatre.  ****  I'm totally serious.  The upcoming Oscars had completely escaped me, and there was even a huge sign that I missed. 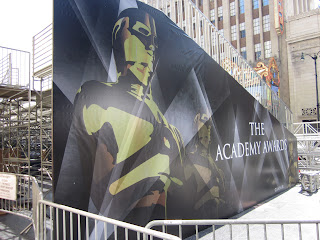 Even though I'm not that into the awards show and missed watching it, since the New York Knicks were playing the Miami Heat, I must admit that it would be nice to hold an Oscar one day.  I solicited my friends for a picture of a Grammy Award for a post I did earlier this year, and my friend, Tracy, said she had a picture of herself with an Oscar (i.e. post awards ceremony at Chateau Marmont). 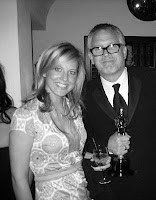 Ok, immediately I was curious.  What a lucky girl!  This is Tracy and she is posing with an Oscar was for the movie, CRASH which won three Oscars in 2005 (i.e. Best Film, Best Film Editing, and Best Original Screenplay).  The man in the picture won the Oscar for Best Film Editing.  Not too shabby!
Maybe if I decide to go "Hollywood" I'll start paying more attention to the Oscars...  I doubt it, though.  There will probably be a game on.
Don't get me wrong.  I love movies.  I saw Black Swan, The Fighter and The Social Network.  I liked The Social Network the best.  I actually watched The Fighter after watching Black Swan on the same day, and I thought Black Swan was overrated.  The Fighter was interesting to me for a number of reasons, but primarily because I'd actually been to Lowell, MA.  The city plays a distinct character in the movie, similar to New York City in Sex and the City.

One thing I learned from last night's awards ceremony, I need to watch The King's Speech.
THE WIRK
Posted by THE WIRK at 11:50 PM