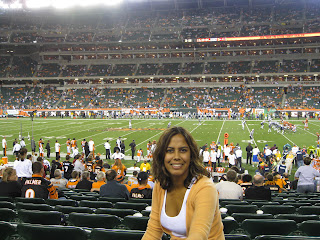 I'm going to switch gears for a minute and go back to football.  No, I don't want to talk about the labor talks and negotiations.  I want to talk about Carson Palmer.  I saw that Carson Palmer, quarterback for the Cincinnati Bengals, wants out of Cincinnati.  I think I also saw that he more or less gave management an ultimatum ~ trade me or I'm retiring.
Well, I want to know when the retirement party is going to be held.  I haven't really kept up with the Bengals.  In 2007, I took my mom to see a Monday Night Football game.  The New England Patriots were in Cincinnati, and I had wanted to see the new Paul Brown Stadium.  The Bengals lost that game and ended the season wit a record of 7-9.


I'm originally from a suburb of Dayton, Ohio.  I'm used to driving south (i.e. through Monroe, OH) on the way to Cincinnati and seeing the Touchdown Jesus on the left side of the road.  Just last summer Touchdown Jesus was struck by lightning and caught on fire.  If I remember correctly, I was in Los Angeles for the NBA Finals and doing my MLB All-Star Mickey Mouse Scavenger Hunt.  Don't know what I'm talking about?  Here's a video.
Ownership turned down Palmer's request for a trade, and it looks like Palmer is putting his house up for sale.  If you ask me, he should stop talking to realtors and practice throwing the football.  Bengals fans are going to need him to perform next year in Cincinnati as a Bengal. 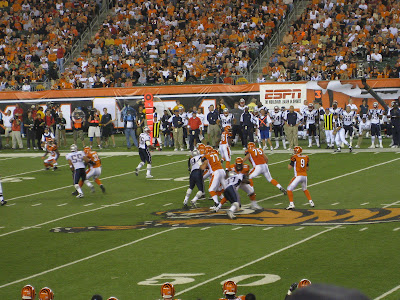 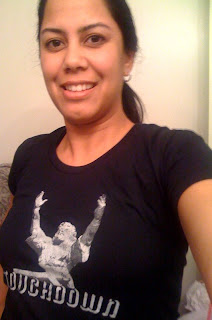 As for Touchdown Jesus, you can buy a shirt from Prep Clothing with Touchdown Jesus on it.  The soft, comfortable shirt can serve a dual purpose if/when you wear it to the game(s) to help root Palmer along.

Let's be real...  A little divine intervention couldn't hurt the Bengals' cause.
Actually, pick one up even if you're not a Bengals fan...  A touchdown is still a touchdown!

**** In the interest of full disclosure, I received my Touchdown Jesus shirt gratis. However, I really like the product and am happy to promote it and the company.