Kobe Bryant is the first athlete to be honored outside of Grauman's Chinese Theatre and I wanted to see his concrete slab.  Kobe's footprints and handprints are being housed inside the theatre so the only way to see them is to buy a ticket for the movie or take the tour.  I opted for the tour, and since I was the only one who bought a ticket, I basically had a private tour guide.
Since I had individual attention, I was able to ask plenty of questions and move through the tour and my own pace.  My tour guide was very knowledgeable and even gave me a coupon to lessen my ticket price.  As we started the tour, we entered the theater and I could see the Chinese theme.  ****  Did you know there's an Egyptian theater also? I didn't.
Immediately I beelined to the front of the theatre for the Kobe Bryant slab of concrete.  Did you know that the honoree practices on three slabs before given a chance to "work on" the larger slab that will go outside?  I didn't.  For Kobe's practice ones, he only did his hands.  For the official one, he did both his hands and his feet. 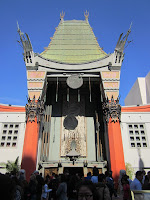 I'm not going to tell you everything I learned on the tour, because frankly I don't remember it.  I do think it's an interesting tour though, especially if you like movies.  In college, I took "Introduction to Theater and Film", and it was interesting to learn more about some of the actors and films from that course in relation to Grauman's Chinese Theatre. 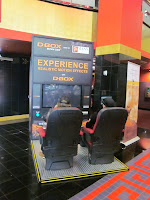 The tour also includes a trip upstairs to a more modern theater with more modern technology.  Ever sat in a seat with D-Box technology?  I did.  It's very cool and now I wish more theatres had it.  The seat moves to go along with the action on the screen!
Grauman's Chinese Theatre is easily accessible by Metro.  I started my trip at the 7th Street Station and took the red line to Hollywood and Highland.  It cost me $3 round trip and the ride is approximately 20 minutes one-way.  I'm usually not one to take public transportation, but this trip was very easy and a great way to avoid LA traffic.
THE WIRK
Posted by THE WIRK at 1:42 AM