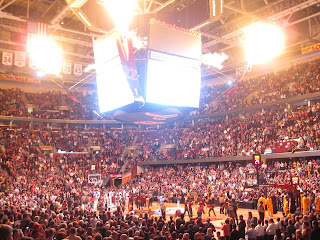 The Washington Wizards take on the Cleveland Cavaliers at 6PM ET.  The Wizards look to win their 1st road game when the venture into Quicken Loans Arena.  Currently, the Wizards are 0-25 on the road.  That's not a typo.  The Wizards are winless when they leave the Verizon Center.
The Cleveland Cavaliers haven't fared much better this season.  It's no secret that things have taken a 180-degree turn since LeBron James decided to take his talents to South Beach.  The Cavaliers were on a downward spiral and lost a string of 26 games.  26 games.  No, that's not a typo.  The Cavs lost an abysmal 26 games, and were the joke of everyone who had an interest in the NBA and a voice.  Finally the Cavs tasted victory this week, when they defeated Blake Griffin's Los Angeles Clippers (aka the "Blakers).  The Cavs hadn't won since 12/18.
The Onion Sports Network even did a piece on about the team.  The premise of the humorous piece was to scare kids straight by making them visit a Cleveland Cavaliers practice.  The link to the Onion Sports Network piece is here for your enjoyment: http://www.onionsportsnetwork.com/articles/kids-in-scaredstraight-program-visit-horrifying-cl,19156/.
I remember when the Cavs v Wizards match-ups used to mean something.  It seems like ages ago that LeBron James' Cavs were battling Gilbert Arenas and Caron Butler's Wizards for a playoff spot in the East.  It was less than 5 years ago that these games meant something, but my how the times change. 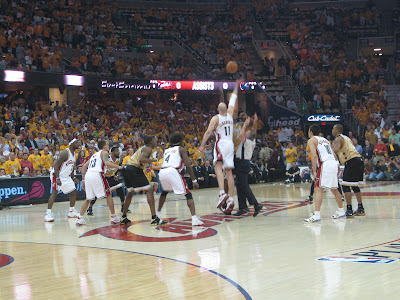 The opening tip and arena will NOT look like this tonight...
The Cavs are going into tonight's game with a record of 9-45. The Wizards sport a record of 14-38.  For tonight's match-up, according to Covers.com, the Cleveland Cavaliers are a 1.5 point favorite.  If I were in Vegas, I wouldn't even think about touching this game.  I believe both squads have to be looking at this game as winnable.  The Cavs won the first game in Washington DC on 11/8.  Tonight's match-up will be interesting for all the wrong reasons, but since I'm in the TV market for the Washington Wizards, I may watch this game.  Antawn Jamison was the hero in the Cavs game against the Clippers, and he's facing his former team (i.e. the Wizards) tonight.  I expect him to play big.  The key word there is "expect".
As an Ohio girl, I'd root for the home team.  Go Cavs!
THE WIRK
Posted by THE WIRK at 3:55 PM