The Boston Celtics beat the Miami Heat after coming out big in the 2nd half.  The Celtics escaped a late Heat rally in the 4th quarter, but the 35 points scored by the Celtics in the 3rd set the tone for the rest of the game.
My favorite play(s) of the game show Kevin Garnett's fire to win.  Garnett makes contact with Mike Miller and Dwyane Wade makes contact with Garnett.  Wade was obviously sending a message to KG that he saw what happened, and both men played on.  Messages sent and delivered, and the passion that the crowd expected to see in Boston was there after what seemed to be a relatively quiet 1st half.


For the Heat, Chris Bosh was the leading scorer with 24 points, and LeBron had 22.  I don't expect the Heat to win any game where Bosh is the leading scorer, so let him shoot all day long.
As for the Celtics, who came away with the W, Garnett led all scorers with 19.  There was double-digit, balanced scoring among the majority of the Celtics, except for Paul Pierce who only tallied 1 point.  ****  For the record, Nate Robinson was scoreless and Avery Bradley only played 9 seconds and was scoreless.  I'm sure Pierce, Bradley, and Robinson don't mind their individual stat lines this afternoon, since their team was victorious and is now on top of the Eastern Conference. 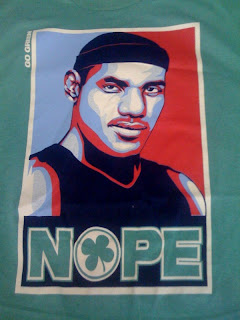 It came down to the wire, and Mike Miller missing a 3-pointer to tie the game.  Final score was Boston 85 - Heat 82.
Am I the only person that remembers that ridiculous clip of LeBron James counting on his hands the number of championships the Heat will win?!?!  Am I the only person who then heard him backtrack and talk about how it's going to take time for the Heat to build the same chemistry?!?!  Give me a break.

It's official.  My LeBron Nope T-shirt is lucky!
THE WIRK
Posted by THE WIRK at 3:45 PM