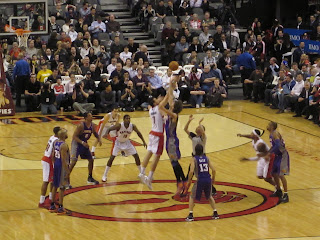 Last night, I was able to check another venue off of my list as I visited the Air Canada Centre in Toronto.  I came out to Toronto to watch a couple of games this weekend and up first was the Phoenix Suns v Toronto Raptors game.  This game was intriguing for a number of reasons.  Two of which were the return of 1) Vince Carter and 2) Steve Nash.  Sure these two have returned to Toronto before, but that fact doesn't make it any less special.
The Air Canada Centre looked full last night.  I asked the women, sitting next to me, if that was the normal size of the crowd or of it was a larger crowd because Steve Nash was back in town.  They estimated that there were about 25% more people in the arena, because of Nash's return.  ****  I'll be back at the Air Canada Centre on Sunday for the Dallas Mavericks game so I'll have a better handle on crowd size then.
﻿﻿
﻿﻿The Toronto crowd's reaction to the return of Vince Carter to the Air Canada Centre was somewhat similar but not even close to Cleveland's reaction to when LeBron James (i.e. vilified) returned.  Toronto's wounds aren't as fresh, when it comes to Vince Carter, but make no mistake ~ from the sound of it, they haven't forgiven him for leaving.

Vince Carter hasn't played for the Toronto Raptors since 2004, when he was traded away.  If I didn't know any better, based on the crowd's response, I'd have thought that it was just yesterday that he and the city of Toronto "broke up".  Every time Carter touched the ball, the crowd would boo.  Really?!?!  It's been more than  6 years, and Toronto still boos him.  At any rate, I guess it's good to see that the city supports its team. 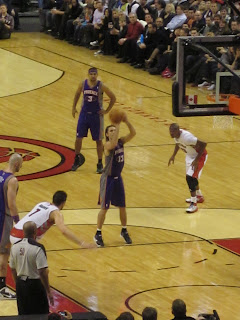 Steve Nash's ovation was much more positive from his home country.  The crowd in the Air Canada Centre cheered for Nash, regardless if they wanted the Raptors or the Suns to win.  Further, former teammate Leandro Barbosa and Nash hugged at half court prior to the opening tip.
As I watched the game, I couldn't help but notice the man in front of me with a Washington Nationals hat on.  I found this interesting since the Nationals aren't very good and I didn't expect them to have a following in Toronto.  Further, I was in from DC, so funny that he was sitting in front of me.
Another interesting moment was when they showed Bill Bellamy on the jumbotron.  Why was he at the game?  Turns out he's performing at the Sony Centre for the Performing Arts, Saturday (i.e. tonight) at 8PM.  ****  After the game, my friends and I went to Real Sports.  Guess who was there.  Yes, Bill Bellamy.  He seemed like a nice guy, but I only said, "Hi".
After the game, I waited until Vince Carter completed his post-game interview before heading into the tunnel.  There was an older man asking a security guard if Charles Barkley was here.  What?!?! Why would Barkley be here?  However, the older man was adamant that he could see Barkley.  As I heard him describe the man in question, and point towards the guy he thought was Sir Charles (aka the Round Mound of Rebound) I couldn't help but chuckle.  "That's Scott Williams," was my reply to the older man.  Too funny, and for the record, my friend Scott does not look like Charles Barkley. 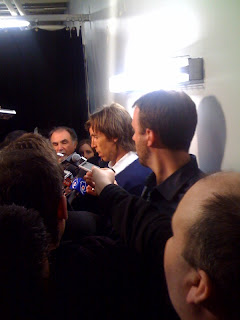 As for the game, for the most part, the Suns had a 18 point lead.  Ironically, the final score was 110-92, as the Suns won their first game of the 6 game road trip.
For the Suns, Marcin Gortat  had a double-double (i.e. 17 points and 11 rebounds).  Vince Carter also contributed 17 points, and Channing Frye added another 16 points.  Steve Nash, Canada's own, played a relatively quiet game, but added 7 points with 11 assists.

For the Raptors, Andrea Bargnani came to play and contributed 26 points. Leandro Barbosa was the second highest scorer with 15 points.

When the game ended, and after a few post-game interviews, we were off to Real Sports.  After my friends and I left Real Sports we headed to Maison on Mercer for Steve Nash's fundraiser.  Walking in easily with the Phoenix Suns and being outfitted with the appropriate white wristband, it was a fun night.  DJ Clue killed it and it was fun chatting it up with the Suns and Leandro Barbosa.  Good people, great music, fun times!

The Suns hope to continue winning on their road trip against the Indiana Pacers on Sunday.  The Raptors are also active on Sunday against the Mavericks.