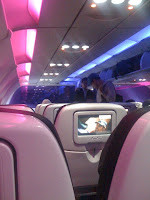 I flew to Los Angeles on Friday on my first Virgin America flight. **** If you haven’t flown Virgin America, do it. The airline is HOT. Virgin America is like a W Hotel in the sky. The airline is sexy. Wifi, individual TV’s, power outlet to charge electronic devices, and the ability to order food whenever you like through your TV screen.
Upon arrival at LAX I had to hustle to the W Hollywood to pick up tickets to the Nike party. **** The tickets were courtesy of my friend the Insideplaya and Q-Tip. Thank you, guys! As I raced to Hollywood, I realized that since my flight was delayed 2 hours, I was going to miss the NBA All-Star Celebrity game. So much for seeing Magic Johnson and my Bieber-fever… **** At NBA Jam Session, one of the ESPN radio guys described Justin Bieber as the Ricky Rubio of the Celebrity game. Great line! Yes, I missed the game. That’s just the way it goes sometimes. 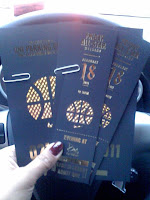 I needed to pick up the tickets at the hotel, for the party later that night and LA traffic wasn’t cooperating. With 10 minutes to spare, I picked up the tickets. Good thing I checked my ticket envelope! Originally they forgot my +1, but the problem was solved easily once I pointed out the problem and showed my email history. Thank you, Nike! 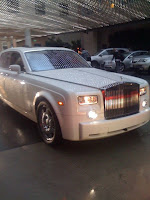 As I was leaving the hotel, people started to arrive. I’m not a car person, but I do know a Rolls Royce when I see it. Nice!
With tickets in hand I raced back downtown to check-in to my hotel. After checking in, I hopped in a cab to make it to the Rookie Challenge. I wanted to watch the NBA All-Star Rookie v Sophomore game. **** Zydrunas won MVP of the game many years ago. Did you know that the trophy is actually 2 pieces? Pay attention, next time. The player who raises the prize holds onto both the base and the top part. 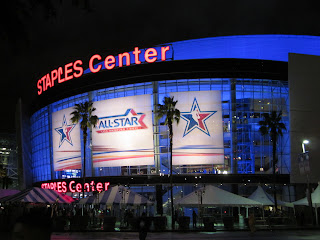 I made it to the Staples Center for the Rookie v Sophomore game and decided rather than watch the rest of the 1st half, I needed to get in line for food. I WAS STARVING. I hadn’t eaten since 8AM EST and it was probably 7PM PST. With each Rookie Challenge ticket, came a $15 food voucher. I had 2 tickets, and bought $15 of food and $15 of candy. I like candy.  **** I bought Red Vines for the first time. Are they supposed to be less sweet, compared to Twizzlers? I prefer to Twizzlers. Preference for Red Vines must be a West coast thing.
For the Rookie challenge I decided to climb to the top of the Staples Center. I did it in 4-inch heeled boots. This was a HUGE mistake. My feet still haven’t forgiven me, but I wanted to get a picture of the entire court. 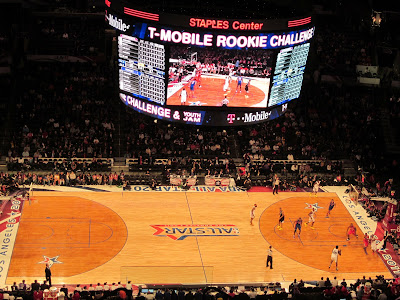 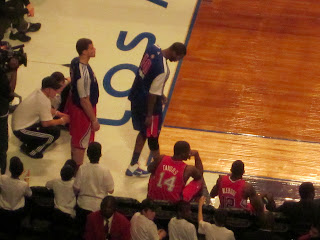 Seeing as that the All-Star festivities were held in Los Angeles and Blake Griffin has garnered so much positive attention, the crowd at the Staples Center yelled, "We want Blake," towards the end of the game.  He stood up to tease them, but didn't re-enter down the stretch. 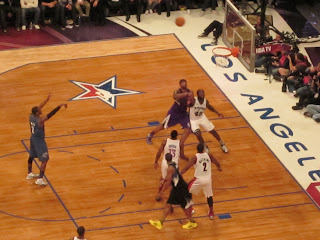 The Rookies won the game, and DeMarcus Cousins led the squad with 33 points. John Wall had 12, points and 22 assists in 29 minutes of action. The Washington Wizards’ own was the MVP of the Rookie v Sophomore game!
THE WIRK
Posted by THE WIRK at 8:09 PM