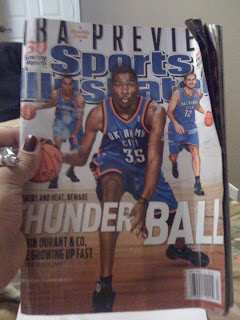 I've been carrying the Sports Illustrated NBA Preview issue around with my laptop since before the season started...  Anyone who knows me knows my laptop goes with me everywhere.

Call me Linus and consider that issue to be my blanket, even though I still haven't opened the magazine.  Actually, I just noticed that Russell Westbrook isn't even on the cover... Crazy!  Of course Kevin Durant is featured, but behind him are pictures of Thabo Sefolosha and Nenad Krstic.  I'm not about to dog either of their games, but based on what I've seen watching the Oklahoma City Thunder, I haven't really been impressed with Krstic.

Seem like a huge oversight to me, and I bet whoever was in charge of the cover, would like to redesign it now...