Cavs v Wizards ~ Andray Blatche had a career night, Wizards get the "W" 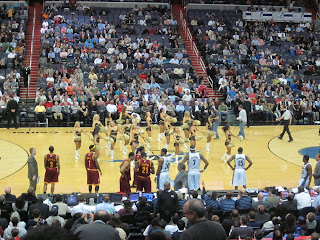 Yesterday, I was flipped a last minute ticket to the Cleveland Cavaliers v Washington Wizards game at the Verizon Center.  I wasn't overly excited about going to the game, but I thought it'd be a good chance to see an old friend and watch two under-performing squads battle.  I didn't expect much from last night's match-up, especially since John Wall was serving a suspension (i.e. he had scuffled with the Miami Heat's Zydrunas Ilgauskas on Wednesday night).
*****  I'd be lying if the chance to eat Dippin' Dots again didn't factor into the equation also.  I have new found love for those treats.  You'd think they were new, but I've re-discovered my love for the ice cream.  Incidentally, at the Verizon Center, the serving size is smaller than the larger size at the Quicken Loans Arena, but the Verizon Center charges more (i.e. $5).  Beggers can't be choosers, though so I spent the money.  Oh, it's cash only at the Verizon Center so be prepared. 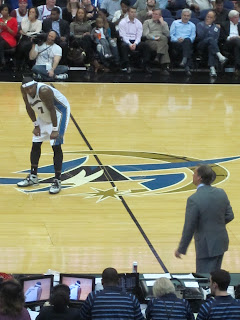 The story of the game was Andray Blatche's performance to lead the Washington Wizards to victory.  That's right, boys and girls, the Wizards won the game.  Blatche had 36 points and 19 rebounds. 16 of Blatche's rebounds were offensive.  JaVale McGee added 25 points, and Jordan Crawford notched a triple-double (i.e. 21 points, 11 assists and 10 rebounds).
In the losing effort for the Cavaliers Ramon Sessions led the team by dropping 26 points.  ****  I remember when he "played" for the Minnesota Timberwolves...

Another thing that was interesting was seeing Baron Davis is a Cleveland Cavaliers uniform.  I actually wonder if he's gotten used to seeing himself in the uniform as well. 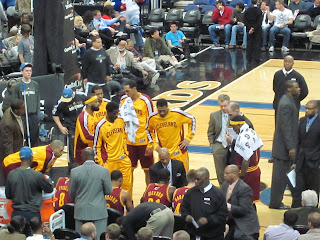 I may not be familiar with the roster of Byron Scott's Cleveland Cavaliers, but since Ohio will always be "home" I do feel connected to them.  It was great to see Max Benton, the trainer, on the bench still.  Veteran, Strength and Conditioning coach, Stan Kellers, was there also, sitting behind the bench.  It must be strange for them to be a part of and remember the Cavs' glory days and now be a part of the organization...
At least things can only get better for the Cavs franchise...  Right?!?!
Wizards won: 115-107.
THE WIRK
Posted by THE WIRK at 7:20 PM