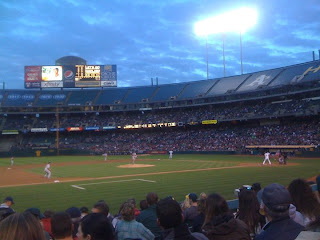 Last night I ventured to Oakland-Alameda County Coliseum (i.e. which opened in 1966) to watch the Boston Red Sox play the Oakland A's.   I went to the venue, specifically to check out a new venue and see what people are talking about when they complain about the venue.  I've never seen the Oakland Raiders play a home game.  With the NFL Lockout, ,proximity of the venue to where I reside, and my desire not to return to the Coliseum any time soon I probably won't be back for a game for quite a few years.  ****With any luck, Oakland will have a new stadium/ballpark by then.  I have my fingers crossed for Cisco Field in San Jose!
I was told I could take BART to the game, but I decided to drive.  $17 later I was in the parking lot.  People were throwing footballs and grilling.  The tailgating looked fun, but I had to get a ticket so I went straight to the box office.   As I walked towards the ticketing windows, I couldn't help but notice that Oracle Arena (i.e. the home of the Golden State Warriors) looked so much newer.  Little did I know that was just the beginning of my surprise...

Ticket in hand for a seat 10 rows off the field, by the A's dugout, I was ready to walk the concourse and see what the Coliseum had to offer.  As I walked the lap around the concourse I was underwhelmed.  The path is narrow, and I wonder whether 6 adults holding hands could stand the width of the concourse.  This isn't conducive to fans who are trying to navigate the crowds to find their seats, consume concessions, and/or shop.
For baseball there are numerous concession areas that are vacant.  Further the upper deck sections are covered by a tarp.  My guess is that these seats don't sell.  Aesthetically, I think it's a good solution.  I just think it's sad to see Rickey Henderson and Dennis Eckersley's names up top, representing an "old and busted" venue.  Yes, I said it. 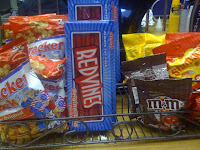 I caught the opening pitch after visiting the concession stand to grab my customary order of a hotdog and nachos.  The concessions lady was a happy lady and that was nice, since I was already a bit disappointed that I had made the trip to the game.  ****  Further, I was reminded that I was on the West coast when I saw Red Vines amongst the candy selections.
I stopped in the ladies room.  That was a necessity, but a mistake.  I've seen restrooms at rest stop and train stations that are cleaner and more modern.

As the night grew chillier and the lights came on, I began to feel some "charm" for the venue.  Unlike Red Sox manager, Terry Francona, my night at the park didn't end early.  Francona was tossed after arguing with the home plate umpire in the top of the 4th.  Actually, around the time Francona left, I felt like leaving the park, but I stuck it out until the top of the 8th.  ****  I'm not one for leaving games early, but I'd seen enough and wanted to get out of there.

I left with the A's in the lead and a score of 1-0.  I am not familiar with the A's, but I was impressed with the pitching of Brett Anderson.  He ended up pitching a shutout for 8 innings.  I also didn't know that Hideki Matsui is an A, until last night.  In the bottom of the 1st inning, I saw Coco Crisp score.  As I mentioned, I left at the top of the 8th.  As a result of that poor decision, I missed the 4 runs that the A's scored in the bottom of the 8th.  C'est la vie.

I still need to download the pictures I took of the venue and at the game, but my computer can't pull them off my camera right now.  The irony...

If this venue was an amusement park it'd be called "NO FLAGS".  On a 5 star-rating system, it gets 0 stars.

Today I've been telling people that knew I went to the game last night about my adventure.  They're laughing and telling me, "Told you."  Literally.  That's what they're saying.  Honestly, most of the fond memories these locals have of that venue have to do with the tailgating in the parking lot or some story they remember from the 1980s.  Needless to say, unless you have a time machine and/or you're a baseball fanatic, pay the $17 and hang out in the parking lot.