Giants lost to the Braves, but I won with my Panda hat 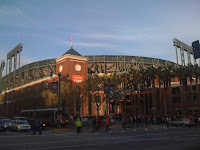 Friday night I ventured out to AT&T Park for my second visit.  I drove to the Hayward Park Caltrain station and decided to head to the ballpark using public transportation (i.e. rather than fight traffic and pay more to park).  Yes, it's true.  I'm not a fan of public transportation, but when I travel I like to try to figure out the best way to do these adventures and most of the time, public transportation makes more sense.  ****  It cost $3 to park at the Caltrain station and the fare was $4.50 each way.  I can almost guarantee that it'd cost more than $12 to park by the park, so already I was a winner.
Did you know that you could bring your own alcohol and consume it on the train on the way to the baseball game?  I didn't.  Oh, and if you're underage don't try to get away with it.  The train I was on had police on it to make sure people were of age.  Further, you're not allowed to consume alcohol or have an open container on the return voyage from the ballpark.
It was a short walk to the ballpark from the Caltrain station, and the scalpers I expected were plentiful.  For a rookie buyer this can be intimidating, but if you stick to your guns and know what you want, the scalpers respect it.  I wanted a premium field club ticket and the scalpers didn't have it.  I ended up going to the box office and luckily they had a premium field club ticket for me. 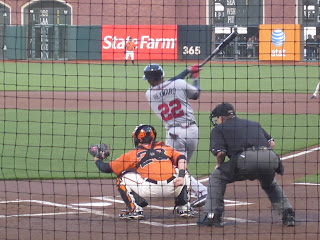 As I entered the park, I went to the concession stand and bought food.  I then went through the tunnel to my seat.  My seat was 3 rows behind home plate (i.e. if you don't count the 3 rows in the Lexus area).  FANTASTIC. 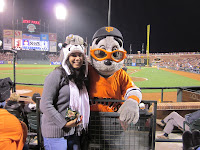 In between innings, I scooped the $20 Panda hat, that I'd been coveting since my previous visit.  I couldn't have been happier, except that the World Champion San Francisco Giants lost to the Atlanta Braves.  ****  I really don't have a preference between either team, but when I visit a venue I usually root for the "home" team.


By the way, did you know that Lou Seal has his own 2010 World Series bling also?  Check out the picture! 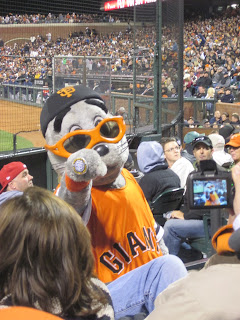 Giants' pitcher, Madison Bumgarner, was relieved of his pitching duties in the 3rd.  Tommy Hanson ended up leading the Braves to victory.  The final score was 4-1.
﻿ 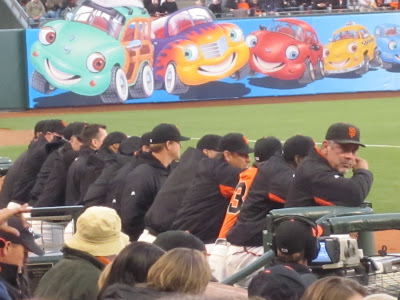 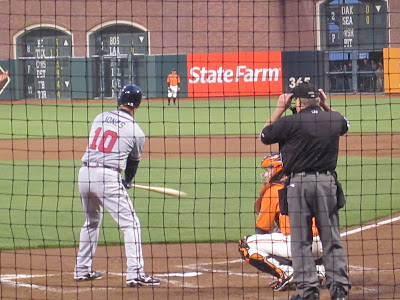 ﻿
﻿﻿The lone Giants' run was scored by my favorite Giant, Pablo Sandoval.  So even though, the Giants lost, my evening wasn't a bad experience.  In fact, I can't imagine ever a bad time at the most beautiful ballpark I've ever seen! 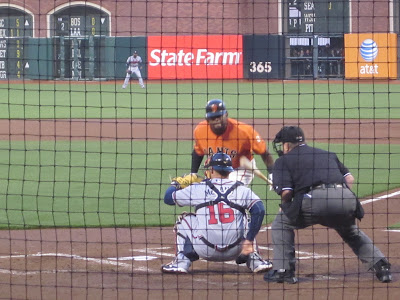