I've seen more than enough of UConn and Butler, since I went to the 2nd and 3rd rounds of the 2011 NCAA Tournament in Washington, DC.  I was at the Verizon Center for all the sessions and was fortunate to have a seat near the tunnel where UConn came in and out.  I watched UConn cheer and celebrate when Pitt was defeated by the Butler Bulldogs.  They obviously knew felt that their road to a 2011 NCAA Championship would be smoother if Pitt was eliminated.

It should be a good match-up tonight.  Even though I've seen these two teams play "live" enough to last me a lifetime, I will watch. 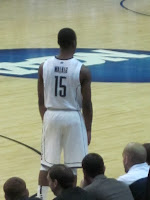 I think Vegas has UConn as a 3-4 point favorite.  I'm not a huge fan of Jim Calhoun, but I do like Kemba Walker.  I didn't know that much about him, until I watched him play "live", but you can tell that he definitely enjoys playing the game.  It's also apparent that he and Coach Calhoun have a great relationship.  I watched them smile and discuss the game on the sidelines and you can tell there's mutual respect there. 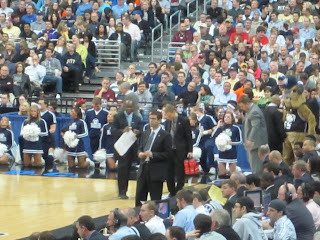 I'd put my money on UConn, but have to admit that I'm impressed with Brad Stevens and his team's poise and "fight".  Plus, it goes without saying (i.e. but I'll do it anyway) that it's quite an accomplishment to make it to the Championship game, in back-to-back years!

Hmm, maybe I'm a little more interested in the game than I thought...  Oh, well.  I'm still content with not making the trip to Houston.

Based on the reaction in the tunnels, UConn wanted to see Butler defeat Pitt and had to know that they "might" see the Bulldogs at the end of the road.  To quote the Pussycat Dolls, "Be careful what you wish for, 'cuz you just might get it."  Ok, Huskies ~ let's see what you got!
THE WIRK
Posted by THE WIRK at 1:27 PM