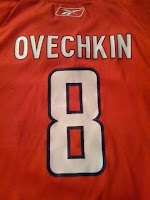 I went out for a little bit on Sunday to meet a friend, and guess who I saw having lunch.  Alex Ovechkin from the Washington Capitals.  I've seen numerous Caps players when I'm out and about, but I've never been that close to Ovie.  He walked by my friends and I.  I said, "What's up, Ovie."  He smiled.  He frequents the same place I go to, because of the close proximity to the Kettler Capitals Iceplex.  Plus, no one really bothers him when he comes in.


If you want a picture of the two of us, too bad.  I don't bother people when they're eating, and when he left, he didn't want to take a picture.
All good though ~ I've seen him play a number of times and at a bunch of basketball games, so I'm sure I'll run into him again, eventually... 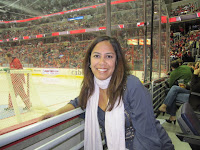 I think this is a sign that I need to start keeping up with hockey again...
Go Caps!