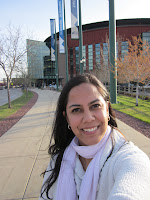 I finally made it to the Pepsi Center for Game 3 of the Oklahoma City Thunder v Denver Knicks game (i.e. just kidding!!!).  Actually, it's the Denver Nuggets.  I couldn't resist making the joke.

I arrived at the Pepsi Center early and decided just to park close to the arena for $15. As I waited with other NBA fans til about 6:45PM to get into the building for an 8PM start, the smell of buttered popcorn wafted outside.  Yes, I was sold.  I bought popcorn the minute I walked in.  A girl has to eat, right? 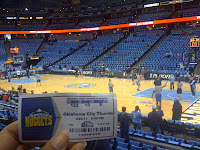 Sporting my new Nuggets hat (i.e. less than $20 from the team store) I went to my seat.  Everyone in the arena had a light blue Nuggets rally towel waiting for them on his/her seat.  Nice.  I save those towels and use them as kitchen towels.
As I watched the pre-game shoot around and warm-ups, I watched J.R. Smith and his teammates shoot trick shots.  Smith's final shot was a full court heave towards the basket and it went IN.  Ending on a high note, Smith ran into the tunnel to get ready for the game.  ****  Who knew this would foreshadow the outcome of the evening's game? 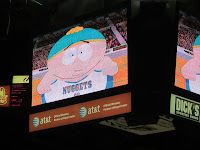 As the pregame festivities went on, I was reminded that the cartoon, South Park, is set in Colorado by Cartman on the jumbotron.  Too funny! 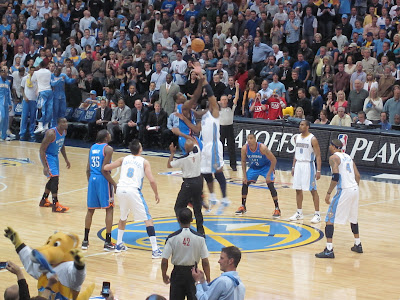 Nuggets fans are passionate about their team.  They cheered as the Nuggets battled the Thunder, but there were a good number of Thunder fans present at the game.  It was good to see all the Nuggets old school jerseys and T-shirts with "English" on the back.  ****  I met NBA Legend, Alex English, a couple of years ago during the All-Star break, and he was a nice guy. 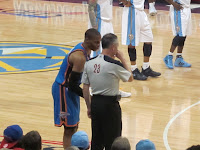 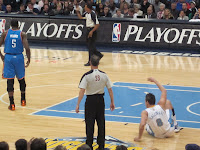 Regardless, the game was a little chippy and there was a good degree of physicality during the game.  However, physical basketball and a good degree of banging on the court is to be expected ~ especially during the NBA playoffs.
Nuggets fans (i.e. sitting near me in the lower bowl) were convinced the Denver was going to nab Game 3.  Unfortunately, for them, this wasn't the case.  I disagree with the 4 guys in their 20s who were sitting in front of me.  I don't believe that you can blame the Nuggets' defeat on the George Karl's rotation.  I believe that you can attribute the loss to the lack of effectiveness from Al Harrington, Raymond Felton, and anyone else who didn't grab an offensive rebound. 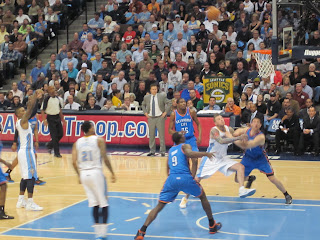 As the Nuggets fought back to close the Thunder lead, the fans at the Pepsi Center were on their feet.  With about 40 seconds left in the game, and the Thunder up about 6-8 points, some Nuggets "unfaithful" started to exit the building.  I find it ironic that the girl behind me (i.e. who looked like she was in her mid-20s) was the one who said, "I don't know why everyone is leaving.  40 seconds is a lot time in the NBA."  THAT is a girl who knows her stuff.
Final thought: The Nuggets fought back and cut the lead to 3 in the final seconds of the game.  The refs should've called the foul against the Thunder, as J.R. Smith took his final 3-point shot in the closing seconds of the game.  A foul is a foul, REGARDLESS of when it occurs during a game.  Nuggets' fans seemed to agree with me, since the "Boos" were very loud and lasted for a few seconds when the game ended. 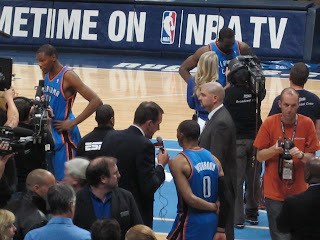 The Nuggets had balanced scoring with numerous high scorers with 15 points.  Scott Brooks' Thunder squad is definitely gelling and Serge Ibaka was the player that really stepped up his game for the night.  Durant led the Thunder with 26.  Westbrook contributed 23, and Ibaka added 22.
Final score 97-94.  The Thunder won.
Great all-around game for the Thunder!  It goes without saying that the Nuggets have their work cut out for them for Game 4, which is tonight at 10:30PM ET.
THE WIRK
Posted by THE WIRK at 3:37 PM