The Bulls take on the Celtics tonight at the United Center - Big game!

As the race for the 8th spot in the East continues, I find myself in Chicago biding my time til this evening's Boston Celtics (50-30) v Chicago Bulls (39-41) game at the United Center at 7PM, Chicago time.  The Bulls defeated the Raptors on Sunday in Toronto.  Ironically, the Raptors are the Bulls' competition, and tonight is the final home game of the season for the Bulls.  Therefore, this game is important for so many reasons.  This game counts!  Teams like the Cavs and the Lakers are resting their stars, but the Bulls will need to dig down deep and earn a victory tonight in order to maintain their position and participate in the post-season.


The current landscape in the East is as follows:
Eastern
Toronto is 9th, right now and currently not going to play in the post-season.

This will be my first trip to the United Center, for a basketball game so this game is important to me also.  Don't forget, I have a goal to hit all the stadiums, arenas, etc. for all of the professional baseball, basketball, and football teams.  I'm not ready to commit to attending home games for all of the hockey teams, yet.  My current count is 62.  Therefore, this game counts personally!  However, as a Cavs fan, I'm not sure I can bring myself to buy a Bulls hat.  My brain keeps going back to Jordan's shot over Ehlo in the 1989 Playoffs...  Ouch.  The Shot still hurts.


Cavs fans look away.  Bulls fans here you go.  Narrating this clip, that I found on youtube is Joe Tait.  He's the voice of the Cleveland Cavaliers and amazing!  I'm convinced he could talk me through performing open heart surgery with his play calling and attention to detail.

For you music fans out there, the last time I was at the United Center was for the Tina Turner concert in October 2008.  Incidentally, for that concert, I was one row ahead and to the left of Oprah, Stedman, Gayle King, and Tom Cruise. 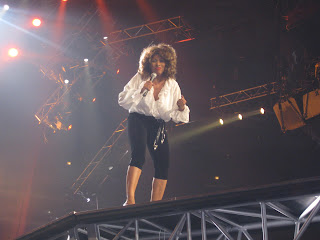 The one and only, Tina Turner 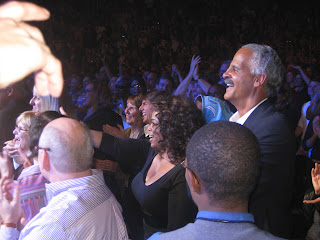 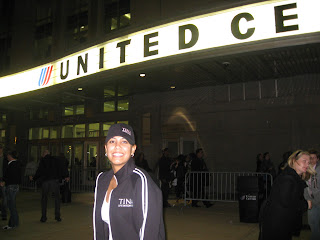 I doubt I'll see Michael Jordan, Oprah, or Tom Cruise at the United Center tonight, but all of you true Bulls fans should giddy up and head to the game!