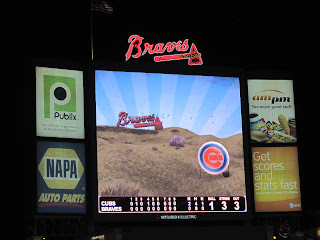 I love Atlanta.  I used to live here, and tonight I kicked off baseball season with a visit to Turner Field.  ****I like to make my travels transparent so I woke up at 4AM this morning to catch a 5:45AM flight. Generally I hop the earliest flights to ensure that I can arrive at a destination and work a full day (i.e. conference calls, emails, system testing). Today, after I was done working, I was able to take advantage of the fact that I was in my other home away from home.

Lou Piniella's Cubs were in town to play the Bobby Cox's Braves.

After a rainy day, spent inside tethered to my laptop around 7PM a friend and I venrtured over to Turner Field.  We missed the opening pitch because of the Masters' coverage, and yes - usually I'm diligent about arriving at a stadium early and being in my seat in time for the opening pitch - BUT admitteldy, I was also curious to see how Tiger would perform today.  ****For those of you that are living in under a rock he shot a 68.

Arriving at Turner Field, I honestly felt like I'd never been there before.  Nothing looked familiar.  It was very strange.  In general, I'm "anti-change".  I value consistency.  However, Atlanta is like home and I have learned to "trust" the city. 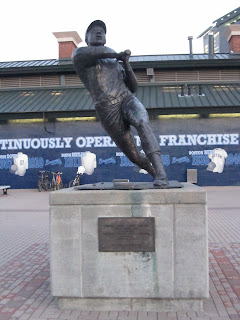 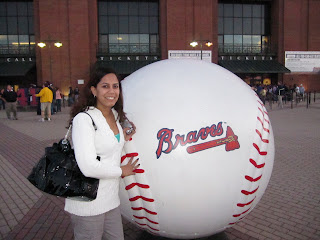 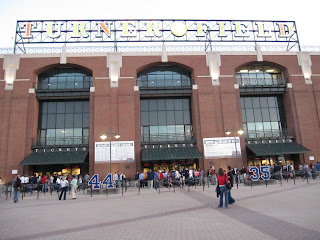 With tickets in-hand, we proceeded to our seats on the 3rd base line. 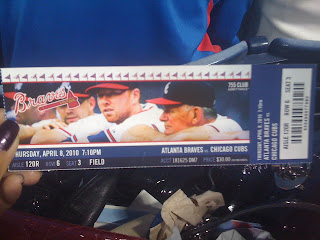 Great seats and great weather make for a fun, relaxing night out. I sat down in my seat, with the Cubs up 1-0 and Chipper Jones at the plate, in the 3rd inning. It was perfect timing to see the Braves' star at bat and  subesequently "walk" to first base.  Unfortunately, Chipper was was forced out at third later that inning and left the game with a side injury.  Omar Infante replaced him in the line-up.  According to ESPN.com, Chipper may not play in the upcoming series of games in San Francisco against the Giants (i.e. the Braves left immediately after the game to head out of town). 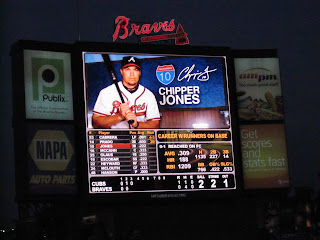 Chipper's last at bat of the night ~ he'd end up walking
The Cubs scored another run in the 4th inning to go up 2-0, and that would be the last run of the game. The Braves would make the game interesting (i.e. they did have more hits than the Cubs), and subsequently the Cubs utilized pitching roster. 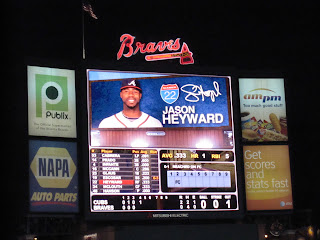 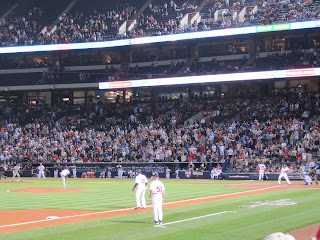 Melky Cabrera at bat ~ the Braves' last chance of the game
The next home game for the Atlanta Braves is on April 16 @ 7:30PM.  The Braves will be hosting the Colorado Rockies. 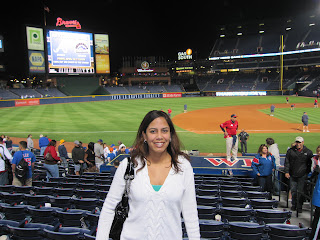