Trail Blazers beat the Suns (Game 4), and I eat my way around Portland

I'd never been to Portland until Friday, but I know some people affiliated with the NBA and media who know that city very well.  I decided some time last week that I wanted to go check out the Phoenix Suns v Portland Trail Blazers series.  I'd never seen either team play at home.  However, I fully expect Phoenix to advance to the 2nd round, and I've been to Phoenix numerous times ~ so I decided that it was time for a quick trip to the Rose Garden (i.e. my 64th venue).

I arrived in Portland and went straight to my friend's place to drop off my luggage and work.  Yes, I worked.  Fridays are light, but they do require some attention.  After work, I went to meet an old friend and NBA veteran.  He and I hadn't seen each other in years, but we caught right up over the longest lunch in history.  Starting off at a restaurant named Higgins and then off to El Gaucho I ate and drank my way through the city in good company, until my other friend came home from work.  I recommend both restaurants highly, but will admit I didn't eat at the 2nd one.

It was around 6:30PM and I received a text from my friend letting me know I had an extra 30 mins to chill since work was taking longer than usual.  Perfect since I needed to nap.  By the time 7:30/8 rolled around, another one of my friends (i.e. a beat writer who was in town doing some TV) had invited me to Henry's Tavern.  Seeing that everything appeared to be in close proximity, my friend and I headed to Henry's.  The 3 of us chatted it up watched a West Coast game and traded stories.  It was a great time.  Dan Majerle walked by our table with friends.  The place was packed.  We were all having fun.  When the game ended, we tried to get my friend to come with us to Portland City Grill.  No dice.  He wanted to stay at Henry's and was off to Oklahoma City in the morning, so we said our farewells.

Portland City Grill must be one of the better restaurants in Portland, because it'd been recommended to me by 2 NBA veterans.  This is more funny than unusual, since most guys in the league frequent the same restaurants when on the road.  For example, don't be surprised if you run into media and/or athletes at Prime 112 in South Beach, XO Prime Steaks in Cleveland, St Elmo Steak House in Indianapolis, etc.  Certain restaurants cater to them by staying open late and/or are geographically desirable due to their proximity to the arena.  And yes, for those of you in the know, I could easily list TGI Friday's for Cleveland/Westlake, but some of you would think I was joking ~ but I'm not...  Now, I'm not telling you to hang out at Friday's...  BUT, back in the day ~ you'd be surprised...

****  Portland City Grill offers great views of the city and had a great scene.  Sit in the bar area by the window, soak up the atmosphere, and relax.  The petite filet was good and the white chocolate macadamia nut cookies w/ice cream were a great dessert choice.

The next day after grabbing a coffee and hitting a park to people watch, it was off to lunch.  I can't remember the restaurant's name but the pot roast sandwich and macaroni and cheese were amazing.  Order both menu items and share with someone.

It was a gorgeous day and the walk to the Rose Garden was an easy one.  It felt like spring. 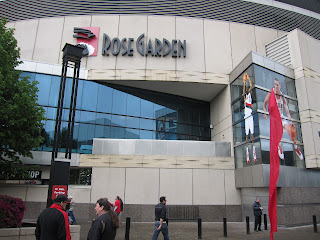 After picking up the tickets and checking out the team store (i.e. I didn't buy a Trail Blazers hat), we went to our seats and then went down towards the court so I could wave to my friend who was doing color commentary. 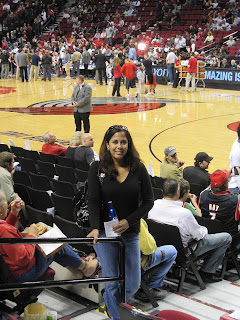 The teams came out to shoot around before the game started and I noticed Brandon Roy was out on the court. The idea of him playing was exciting, since he just had surgery on his knee. 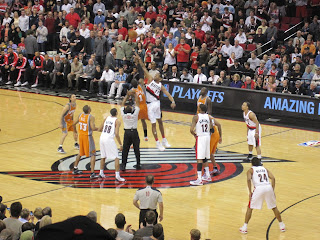 The game started and it was a close one.  The Suns never seemed to get into their rhythm, and the Trail Blazers came out BLAZING!!!  Portland was on fire.  Vegas had established the line at Phoenix -2.  My friend reasoned that taking the Suns was a sucker bet (i.e. enticing everyone to place their money on the Suns, so they'd lose and Vegas would win).  Talk about being correct!  Portland won, and LaMarcus Aldridge proved to be the star.  I definitely took notice of his game.  I certainy didn't expect to hear such a loud crowd and witness a Portland victory.

****  Actually on the way to the game, we passed a man who asked if we were headed to the Rose Garden.  After saying, "Yes," he proceeded to bad mouth the Blazers and said Game 3 was awful.  Well, I hope he changed his mind and gave his team another chance!  Game 4 delivered when it came to excitement and to be honest it got HOT in the building from all the excitement.

One thing I have to say is that the Rose Garden has the nicest group of ushers.  Marlene was working over by the Suns bench and she's phenomenol.  HOWEVER, "Ross" (i.e. the usher from hell) was working the entrance A12 and he needs to be fired or reprimanded severely.  I'm waiting until Monday to log a formal complaint and I'm going to hit basketball operations and even Paul Allen.  I'm not playing.  This man took it upon himself to police another section and "shoo" people out of seats that he thought were sitting in the wrong seats.  Well, he shoo'ed numerous groups of people and then tried to shoo my friend and I ~ when we hadn't moved since the opening tip.   He was waving a sheet of paper and YELLING like a crazy person.  Then he ran over to the other side of the section to talk to the usher that had checked us earlier and she tried to get me to get up and walk over to her.  When I told her I had tickets, the old man continued to flail and wave like a crazy person, so I passed my ticket down.  She passed the ticket back and he went back to his post.  No apology.  No nothing.  Like I said, I've been to 64 arenas across the country and I've NEVER been harrassed like that in my life. 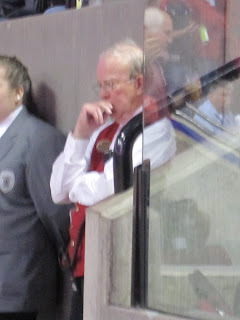 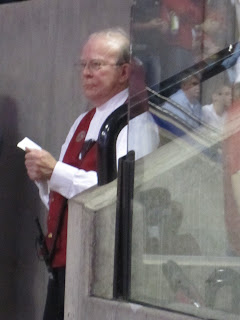 "Ross", Worst Usher EVER: He knows I'm angry and that I'm taking his picture.
The Trail Blazers defeated the Suns, 96-87. 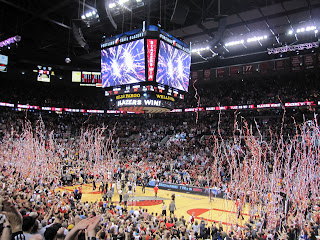 After the game it was off to the On Deck Sports Bar & Grill to catch the end of the Penguins game and finish the rest of the NBA night games before heading back to get my "luggage" and flying home.