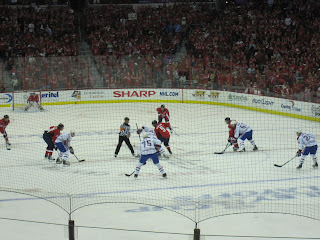 On Thursday night, I watched an exciting Montreal Canadiens v Washington Capitals game, that ended with the Caps losing in overtime.  I watched the game on TV and regretted not being in attendance at the Verizon Center.

Determined to not make the same mistake twice, I hustled my way over to the phone booth and sat pretty in section 104 for Game 2 of the series.  If you're a Caps fan and you missed last night's game, you should be ashamed of yourself.  Plain and simple.  You probably even hate yourself right now... 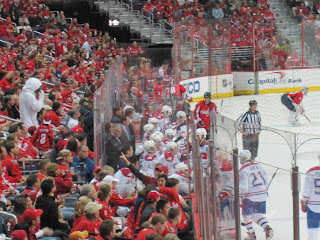 Last night's game in one word, can be summarized with, "UNBELIEVABLE".  Thanks to Metro's delays, I was about 5 mins late to the game.  Yes, I took public transportation.  It's ridiculously convenient to the arena, and the prudent thing to do.  Just my luck due to service delays, by the time my ticket was scanned, Montreal had scored.  The scoreboard read 1-0, and the bad were guys up.  Next thing you knew it was 2-0.  Great.  Jose Theodore was yanked out of the game, and Varlamov was placed in goal.  New goalie, new game...  Finally, still in the 1st period, we got on the board thanks to Eric Fehr, who scored his first goal in the Playoffs.

Time elapsed, the Canadiens caught fire and next thing you knew the Habs were up 4-1. 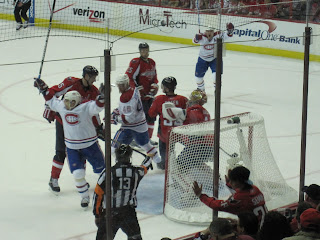 With a 3-goal deficit, things weren't looking good for Caps fans, but unlike in basketball games where it appears there's going to be a blowout ~ Caps fans stay.  The entire arena was "Rockin the Red" and no one was going anywhere. 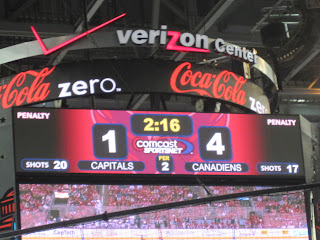 During the game, I was texting scoring updates to my friend in Canada, who couldn't watch the game, since he was at a business dinner.  Each time I'd text him that his Habs had scored, I'd receive the same response, "OMG".  Even he couldn't believe it!
If you can't beat them, why not fight them, right?!?!  I mean, this is hockey...  So, in the 3rd period, Caps fans were treated to a fight when Tom Poti and Scott Gomez decided to mix it up.  Told you this game had everything for a hockey fan.. 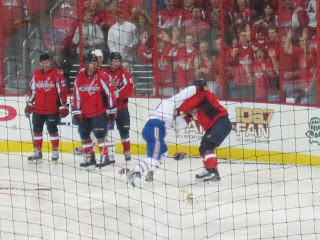 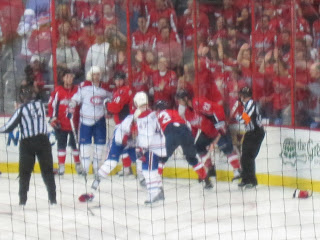 Fight ~ the Habs, Scott Gomez and the Caps, Tom Poti
Sure enough, the Caps were able to find their offense and John Carlson scored his first goal of the Playoffs.  Carlson's goal tied the game at 5, and we were heading into OT.
So many stories can be told about Saturday night at the Verizon Center, but the hero of the game was Nicklas Backstrom who notched a hat trick and led the Caps to victory in OT! 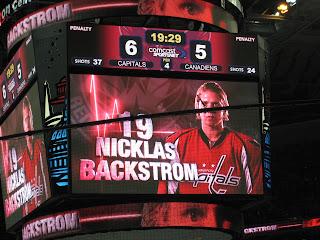 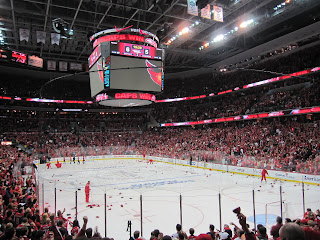 Hat Trick!!!
On the way home from the game, I ran into someone I knew on the train.  Actually, the minute I got on the Metro I heard someone yelling my name.  Imagine my surprise to see that it was a guy wearing a mask.  "Mask guy" was creeping people out on the train and drunk from the DC United soccer game.  He couldn't tell me if DC United had won, but needless to say no one bothered me on the train, while he was next to me.  Yes, I have strange friends. 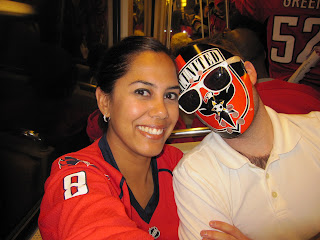