Last night, I parked myself in front of my TV and flipped channels.  That might sound lame to some, but for me, it was about all I could handle.

First up was Game 3 for the Washington Caps and the Montreal Canadiens.  I started watching hockey, 15 mins into the game.  Before you knew it the Caps were up 4-0.  Nice!  Realizing that the Caps didn't need my moral support I started focusing on the Cavs game.

The Cavs were up 10 points and Shaq was on the bench sweating like Patrick Ewing.  A 10 point lead isn't the end all, especially since it was early, but I wasn't interested in watching the game.  No matter how I tried to get into the game, the Cavs v Bulls series just doesn't interest me.  I don't believe that the Bulls are a threat to the Cavs.  I'm not a fan of Joakim Noah either.  I didn't like him in college, and I don't like him in the pros.  He seems awkward to me.  I remember I had dinner with some of my sporty friends and one of them told me that Noah was killing it on the boards and really proving himself.  As I politely smiled and then yawned into my napkin, I'm sure my disinterest was apparent.  The only Noahs that interest me are Yannick and the one who managed to gather pairs of animals and survive a storm for 40 days and 40 nights.  Both of those men's stories, I find far more fascinating than the youngest Noah.  Shoot...  When I was in Paris, I found myself intrigued by the billboard I saw for Yannick's concert.  However, while in Chicago, Joakim was the furthest thing from my mind...  I wanted to see Derrick Rose and the United Center.  Yep, the building was more exciting to me than Joakim. 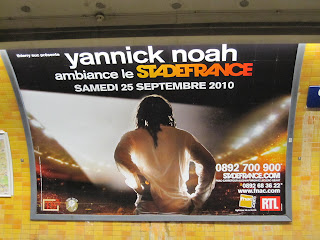 Yannick > Joakim
****  There's an "I hate Joakim Noah" facebook group.  I thought about joining it, but next to "Affiliation" it reads, "Peyton Manning is overrated."  Um, excuse me.  As a Colts fan, I'm definitely not down with that.  Oh well.  They almost had me.
Can someone tell me what Joakim's problem is?  Why does he think he can start jawing with LeBron James in Cleveland?  Further to cement, my feeling that Noah is just terrible, check out the video of him trashing Cleveland.  Now, I'm sure that Cleveland isn't at the top of the list in terms of vacation destinations, but I'm also confident that there are at least 20,000 people who'd be more than happy to put Noah on the Rapid and send him back to the airport.  Don't worry, Joakim.  You'll be on vacation soon enough!  Feel free to go wherever you want in the off season.

The last game I watched was the Jazz v Nuggets game.  It was Game 2 and was being played in Denver.  The injury riddled Jazz managed to defeat the Nuggets.  Injury riddled...  With Kirilenko out and Mehmet Okur rupturing his Achilles it should've been an easy game for the Nuggets...  "Should" was the key word.  What is going on with the Nuggets?  Sure, they're not the same team they were now that George Karl is tending to his health, and Adrian Dantley has assumed coaching responsibilities.  George Karl's presence is obviously missed.  I know Adrian Dantley is knowledgeable, but he only had 1/10 of the passion to win last night's game compared to me.  I'm actually a little surprised that the folks in Denver didn't tell me to, "Shut up," because my inside voice was SCREAMING last night.

The Nuggets are supposed to win this series!  Am I the only person that knows this?  Has anyone told the Nuggets that they can and should win?  ARGH!  It's almost as if the refs didn't want the Nuggets to win either.  Is it just me, or did it seem like every time I heard a whistle blow, one of the Nuggets had drawn a foul.  Crazy...

****  I just checked.  Numbers don't lie.  Fouls for Denver looked like this:
I was still steaming after the game and started thinking ahead to the Suns v Trailblazers game in Portland on Saturday.  I remembered that I knew a former front office executive for the Blazers and decided to drop him an email.  I also started thinking about Carlos Boozer and got reminded of the debacle in Cleveland when he duped management and left for Salt Lake City.  Don't remember?  How can you forget?  Well, just in case you can relive the nightmare by reading the following link.  http://sportsillustrated.cnn.com/2004/writers/ian_thomsen/07/09/paxson.boozer/index.html

Being a Cavs fan, I'll say this.  I know Gordon Gund to be a class act, and I respect Jim Paxson.  I believe in Paxson's basketball knowledge.  Based on those statements, you can deduce how I feel about Boozer (i.e. especially when it comes to the Cavs).  Boozer had a very strong performance last night.  Come on Denver, let's stop getting tattoos, practice, get it together, and WIN! 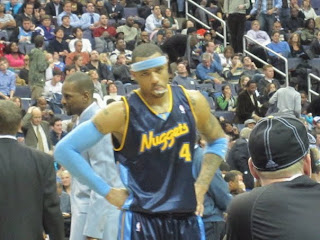 Kenyon Martin had 15 pts, but was hampered with 5 fouls Monday night
Actually now that I think about it, when the Nuggets were in town to play the Wizards, the Wizards won 107-97. 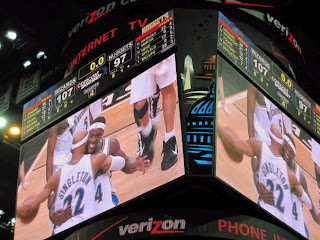 Seriously... What is wrong with Denver?
Enough about all that.  Today is a brand new day and there is a full slate of games on tonight.

Bucks and Hawks tip at 7.

Heat and Celtics tip at 8.
****  Earlier tonight, for his Twitter fans, dwadeofficial, posted this:  "First 1 to get this question rt. How many players on Miami and Boston R from chicago??? And name them."  If you're not on Twitter and you're a fan, you might want to correct the situation.