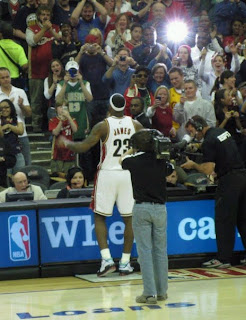 I am watching the Cleveland Cavs whip up on the Chicago Bulls on TV, and trying to resist the urge to take a nap this gorgeous Saturday afternoon.  Somewhere admidst my boredom, I started to think about my plans for tonight and remembered that Game 2 of the Washington Capitals v Montreal Canadiens series is tonight at 7 at the Verizon Center.  The Caps dropped game 1 in overtime, so tonight's match-up is expected to be a good one.  Soooooo, began the hunt for the perfect ticket.

After looking at Ticketmaster and striking out, I went to my favorite ticket broker site.  I wanted to see where those sharks priced the tickets in their inventory, since they're usually the highest once you add fees, etc.  Then I went to Craigs list to see where those folks had priced tickets, but they didn't have a lot of inventory available and the idea of meeting a complete freak, who knew I was carrying cash, this afternoon wasn't appealing.  Ebay is always fun to look at, but there was one guy out in Springfield who wanted a price, that I could get outside the arena tonight ~ so a trip to Springfield was out of the question.  My last and final stop was the Capitals Ticket Exchange, where season ticket holders list their "extras", and I found a ticket listed for a more than reasonable price.

I have a friend who's a Habs fan, and as soon as the game went into overtime we bet about the outcome of Game 1.  The loser owed the winner a trip to Vegas.  Unfortunately the Caps and I lost.  Fortunately, my friend couldn't accept the bet and offered me the trip to Vegas anyway!  Woohoo ~ I won after all!!!  Told you I was lucky.  We'll see if the trip actually pans out, but regardless at least I'm off the hook without having to weasel my way out (i.e. I'll never explicitly renege on a bet).

Anyway, I'm all set for tonight's hockey game, so I'll see you at the phone booth.  Oh ~ and I'll be sporting my "new"  Ovechkin jersey.  This is going to be a good one!

Ugh - in the amount of time it took me to type this, the Bulls have cut the Cavs lead to 7 points.  Time to re-focus my energy towards Cleveland.  Don't get me wrong.  I'm not scared, but seriously...