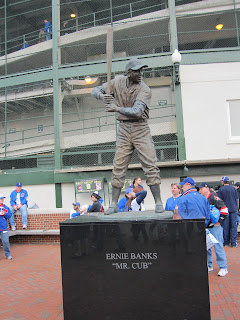 I flew into Chicago yesterday morning with some friends and we all went to the Chicago Cubs Home Opener.  The Cubs were playing the Milwaukee Brewers.  On the way to O'Hare, I was sitting between 2 people that were obviously together.  Weird.  Obviously they prefer window and aisle seats more than they prefer each other, but I digress.

As soon as I claimed my bags I hopped a cab to my friend's house to ditch my stuff.  Let's call my friend Porkchopper/Pork, because that's his nickname.  Pork and his housemates were gracious enough to offer me a guestroom in their house in Wicker Park.  After catching up with him for about 15 mins and taking a conference call for work (i.e. even though I am officially on vacation), we decided to take the L into the city. 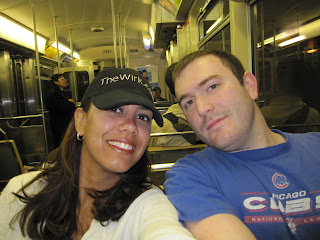 I don't like any form of public transportation.  I'll just put that out there right now.  However, if I'm with a friend and/or it's efficient, I will do it.  Pork is wrapping up law school and had a meeting, so he was only going to take me part of the way on the L.  All the other Cubs fans were batting clean up on my way to Wrigley.  When they got off the train, I'd simply follow.

At the Addison station, I asked a lady where Murphy's was, since that's where the rest of my party would be.  I picked up a Cubs hat at a stand next to the Murphy's for $20 and then went into the bar/restaurant.  After joining them and downing a cheeseburger and a beer (i.e. Old Style is the local beer of choice there), we were crossing the street and heading into the Bud Light Bleachers' entrance to Wrigley Field. 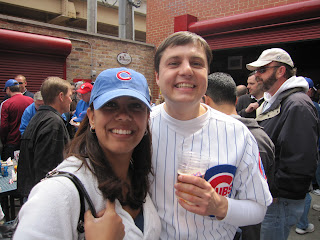 I must admit, I'm not a bleachers fan ~ BUT I've always heard that the way to do Wrigley Field was to sit in the bleachers, so that's what I did.  My friend, Bryan, asked me last week if I wanted to go to the game.  He had an extra bleacher ticket.  Initially I told him, "No."  I couldn't find flights that were inexpensive enough (i.e. around $600).  However, once the idea was planted in my brain, I continued to look at flights.  Before you knew it, flights had dropped to less than $200 (i.e. taxes not included) and I was able to make the trip! 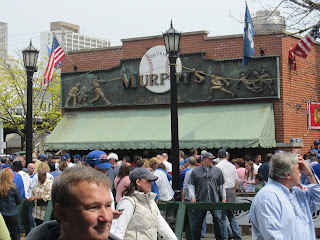 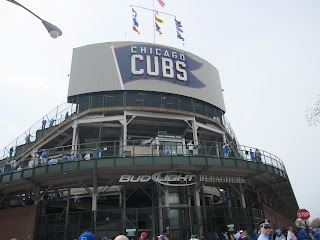 We were able to find a great spot, which we referred to as the "Right Field Sky Box".  It was a platform with a fence in front of it and all 5 of us could stand and/or sit on the ground comfortably. 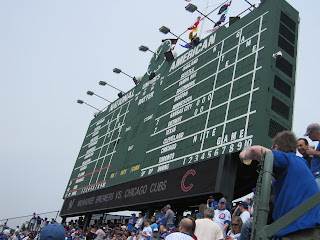 View from our Right-field skybox 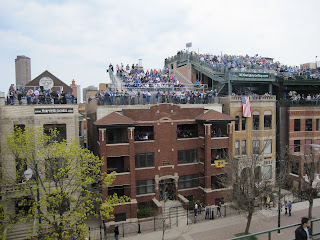 Some of the rooftop bleachers in Wrigleyville 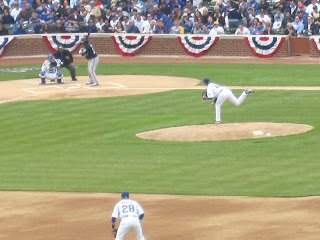 The 1st pitch of the game
I honestly can't remember, but the Cubs must have hit 3-4 home runs.  There was a lot of offense in this game, for both teams, and the weather was great.  It was a little chillier than Atlanta (i.e. but come on, it's the Midwest and I should've known it wouldn't be that warm in Chicago yet).  As I was sipping on mai tai's, I realized that people were correct and that the bleachers were a great time!  They're definitely a fun spot to watch the game.  ****There was a fight in the bleachers and a bunch of people were tossed out of the game after punching and toppling down a few levels and landing on innocent people. 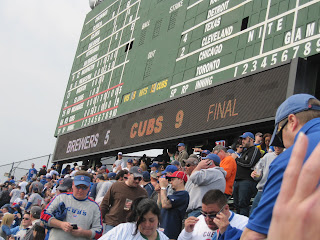 The Cubs defeated the Brewers 9-5. 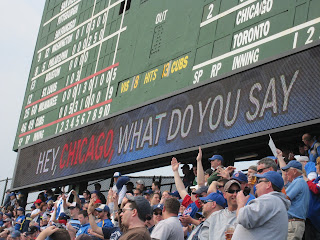 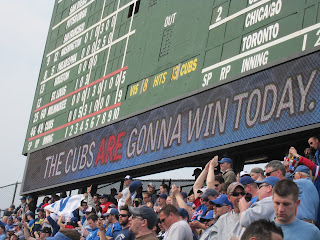 "The Cubs are gonna win today." 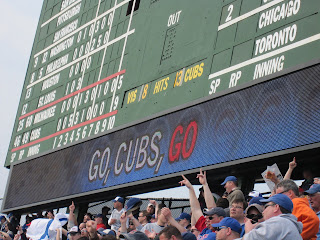 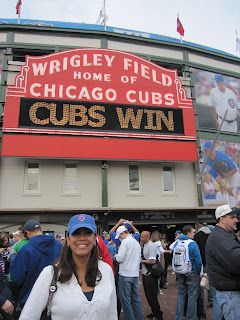 What a great experience for my first trip to Wrigley Field!  I've seen the Cubs twice in less than a week and they've won both of the games.  I might just be their lucky charm, so if any of you Cubs fans want me at the next game, feel free to send me some money and I'll make the trip ~ my paypal address is sjwirk@hotmail.com!  What can I say?  It takes a village... 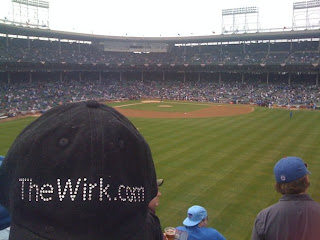