Beyonce, Jay-Z, David Stern, and I watch the Cavs blowout the Celtics in Game 3 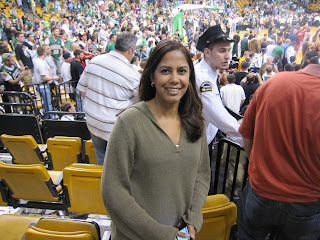 Friday night I was at the TD Garden for Game 3 of the Cleveland Cavaliers v Boston Celtics series.  I showed up.  David Stern, Jay-Z, Beyonce, LeBron, and LeBronsElbow were all in the building.  The Boston Celtics' defense and offense, however, were noticeably absent.  It was a crazy game.  After splitting the pair of games in Cleveland, all my friends who are Celtics fans started to send me messages that my series was over and that I should book a flight to Cleveland for LeBron's last game of the season on Monday.  Ummmm, yeah...  NO. 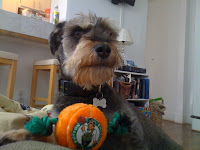 I flew Jet Blue from BWI to Boston and was asleep the minute I sat down.  Waking up in Boston, I cabbed to the Fenway to get settled in at my friend's place.  Ning is practically family.  She's one of the daughters of my mom's best friend and offered to house me this weekend.  Genghis is Ning's dog, and he's also a Celtics fan.  Needless to say, I was deep in enemy territory... 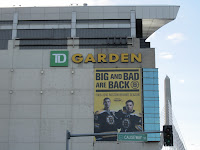 I took the T to TD Garden (i.e. my 67th venue) and it was fairly obvious that I need to get off at North Station since that's where everyone dressed up in Celtics garb exited the train.  Upon exiting the train station I saw the arena and to be honest, there isn't much to see.
When I walked in I found a Ticketmaster kiosk and I was able to easily print out my ticket.  This was incredibly convenient since I didn't have to wait at will call.

I didn't walk into the souvenir shops.  I wasn't going to buy anything, and I didn't want to mess up my Cavs karma.  I was at the game to "ensure" a Cavs' victory.  I'm lucky like that.  I went to the concession stand and ordered my food, and that's when I heard someone call my name out.  I looked and sure enough it was my crush of many years.  I knew he'd be in Boston.  I just didn't know that he'd find me before I told him where I was.

I went to my seat and looked up into the rafters.  Here's the obligatory picture of all the banners. 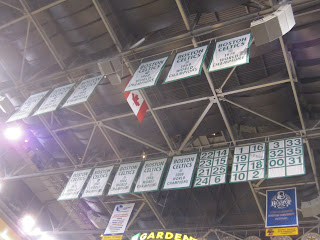 The game started and I just knew that the Cavs were going to win. 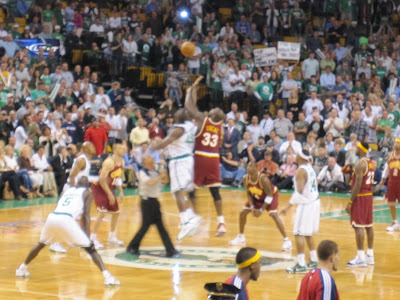 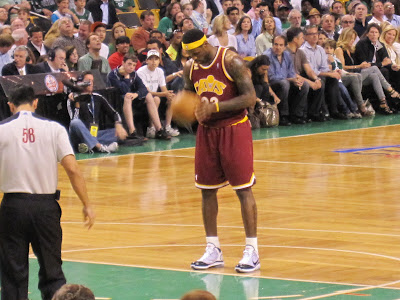 LeBron was on fire
Based on the pics I took I was more interested in Jay-Z and Beyonce being at the game then the game itself. 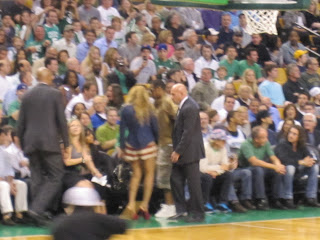 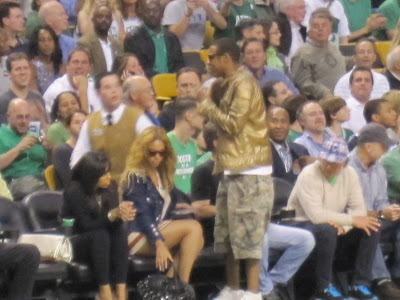 Beyonce and Jay-Z finding their chairs, and William Wesley (aka World Wide Wes) looks over 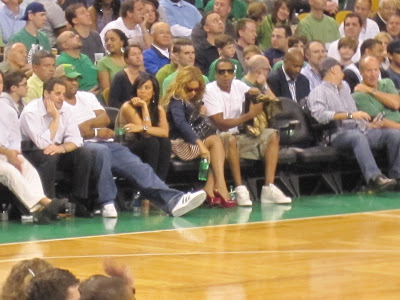 FYI ~ I'm pretty sure that's Kevin Garnett's wife next to Beyonce...
The game was a blowout and the Celtics fans were not happy.  Many of the Boston fans left before the game even ended (i.e. with over 9 minutes left in the 4th quarter the Cavs had already scored 100 points).  The Bruins were playing the Flyers and that game was in overtime when the basketball game ended.  The Red Sox has lost to the Yankees.  It wasn't the best of days for Boston sports, but if anyone knows this city ~ you can never count the team "out"...  It's not over, until it's OVER.

When the game was over Jay-Z and Beyonce crossed over to the side of the court where the Cavs' tunnel was and here's video (i.e. that I shot) of Beyonce, Jay-Z and LeBron leaving the court.

After the game, my Cavs fans and I went to Canal Street to celebrate.  I learned what a LeBron Bomb was.  Actually, I still have no idea what it really is, but it's something along the lines of a fruity shooter and throwing sugar up in the air (i.e. to mimic LeBron's pre-game ritual).  It took a few stops, but finally we found a spot that would let us do it ~ but we had to substitute salt.


Later I found myself in Faneuil Hall and around the Red Auerbach statue and a bunch of other plaques. 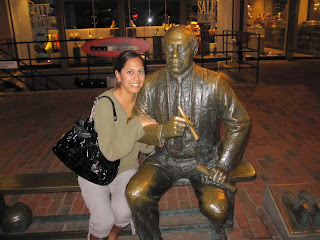 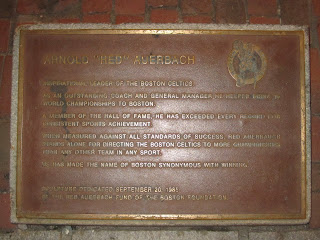 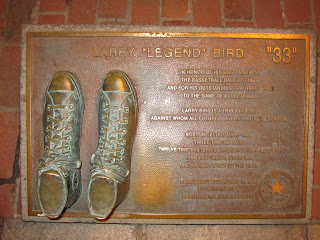 For you Celtics fans...  Larry Bird's plaque.
The Cavs won game 3 with a score of 124-95.  Walking towards the tunnel, David Stern had a huge smile.  I'd never expected such a large margin of victory, but I did expect the win.  I'll be at Game 4 if anyone's curious as to my whereabouts...
THE WIRK
Posted by THE WIRK at 10:53 PM