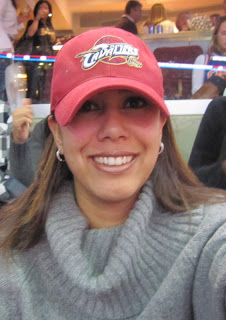 Remember those commercials where the girl would be in a tub and say, "Calgon take me away."?  Well, I'm not foolish enough to believe that works.  I've clicked my heels three times and said, "There's no place like home."  However, my black flats don't even look like ruby slippers and let's face it ~ my name's not Dorothy so that won't work either.  If I had a private plane and could go anywhere tonight, I'd take that plane straight to Cleveland, Ohio.  Yes, I said it.  I'd even invite Joakim Noah to come with me, because we know he can't be busy.  That's just how nice a person I am!  Game 5 is tonight, and the Cleveland Cavaliers should be ready to exploit homecourt advantage and defeat the Boston Celtics.

I was watching TNT earlier this week and I heard Ernie Johnson use the term "LeBrondo".  That made me laugh.  Rajon Rondo was the story of Game 4, and LeBron James was the story for Game 3.  Both teams split games on their home floor (i.e. basically trading wins and losses).  I think I recall LeBron saying that he wanted to guard Rondo tonight.  Well, let's just hope that that doesn't open up the floor too much for Paul Pierce, Kevin Garnett, and Ray Allen.  Can you tell that I'm a Cavs fan?!?!

I hope Cleveland is bringing more of its offense and defense to the table tonight and is ready to dominate.  I got into a discussion last night about the merit of Mike Brown.  My friend was saying that he couldn't coach.  I admit, I am a member of a "Fire Mike Brown" group.  We both remarked that the only play that Coach seems to call in the huddle (i.e. after a time-out, etc.) is the "Give the ball to LeBron" play.  Trust me ~ he and I are smart and have high basketball IQs, but I assure you that even the dimmest bulb on the shortest bus could figure that out!

**** Coaches are in a very unenviable position. We love them when the team wins, and we second guess and join "Fire XYZ" forums when the team loses. I like Mike Brown, when the Cavs win and when he's not snubbing Zydrunas Ilgauskas. Regardless, I will still ultimately blame Danny Ferry if the Cavs don't win a NBA Championship this year.

Come on Cleveland, it's GO time at Quicken Loans Arena!!!