The Cleveland Cavaliers and I are "on a break" 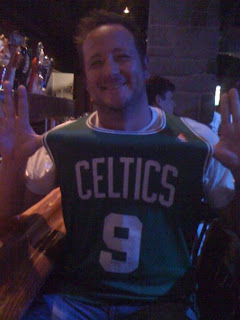 As a Cavs fan, I have to ask, "Why am I friends with this guy?"  Ryan is just one of a few Celtics fans that were out Thursday night and wanted to talk about the game.  Seriously, he's a great guy and one of my many friends that I debate sports with regularly.  In case you are blind and didn't notice, he's also a huge Rondo fan...  During the game yesterday and after it, Celtics fans celebrated, while Cavs fans like myself were numb to the world.
-----------
So, what did you do on Thursday night? Did you do/see anything good? As for me, I made it home just in time for the 2nd half of a heartbreaking game of basketball (i.e. Game 6 of the Cleveland Cavaliers and Boston Celtics series). When I made it home, the Cavs actually had the lead. 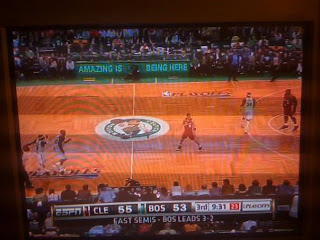 You know when you're in a relationship and it's not going well ~ but you wait it out and hope that it gets better?  Well, last night I broke up with the Cleveland Cavaliers.  Actually, technically, I guess you can say we're on "a break".

The team mentally, physically, and emotionally exhausted me.  Our relationship had such great promise this year and then it just fell apart.

I feel cheated.  I feel misled.  I wanted more than they could give.  I've decided ~ I'm going to see other people.  I don't really care what the Cavs do.  It's time for me to cover baseball and other sports topics of interest.  ****  Actually, this morning I heard a rumor that someone on the Cavs slept with someone else's wife.  I made some phone calls and sent some texts and then learned that supposedly, it's a variation of that rumor.  I'm not going to go into details on this blog, because I don't know if it's true or not.  However, my sources are usually good...

Back to my relationship with the Cavs.  You are who you hang out with, and I believe that there is a lot of garbage on the team.  Antawn Jamison is not a winner.  Anderson Varejao is terrible and every time he touches the ball, I want to scream.  My last memory of game 6 is him launching a 3 pointer and missing (i.e. but you knew he missed it without me telling you, right?!?!).  Another Varejao image is him trying to stop play because he was bleeding.  Varejao if you're bleeding, keep bleeding - but NEVER stop playing defense or "offense".  Actually, NEVER play offense either.  I prefer you that if you must step on the court that you NEVER touch the ball.

I watch the Real Houseweives of New Jersey.  Yes, I like trash TV.  I was watching last week, and I heard the best quote from New Jersey matriarch, Caroline Manzo.  She said, "You hang around garbage long enough, and you start to stink."  That's what I think about some of Lebron's supporting cast (i.e. especially Varejao).
I didn't believe in the Shaquille O'Neal trade being the answer.  I like Shaq, and  I believed in his effectiveness years ago. Although I'm an Ilgauskas fan I recognize he can't play forever. I think Mike Brown should be fired. I also blame Danny Ferry, but then again I blame Danny for almost everything. I blame Ferry for the oil leakage in the gulf, global warming, overweight america, stock market crashes, and rain. It's always Ferry's fault.

Lebron.  Now comes the part where I jockey being a fan and being human.  I believe Lebron will stay in Cleveland.  I also believe that if the Cavs were to win a NBA Championship that this was the year for it to happen.  I can't imagine what it feels like in Cleveland today.  I know how it felt when I went to sleep last night.  I cried.  I actually cried because I know, that they (i.e. the city, the team) know, that this was "supposed to be their year".  I don't know if the rumors are true.  I believe the dynamic is flawed.  I hope Lebron doesn't become the new Brett Favre (i.e. stay, go, stay, go) and hold the Cavs hostage.  I do believe he does want to be recruited, but I do believe he will stay home.

As an Ohioan and a Cavs fan, all I can do is hope.  As I said, the Cavs and I are "on a break" and there's no time for tears, it's baseball season!