The Yankees crush the Red Sox, 14-3 on a Saturday night at Fenway Park 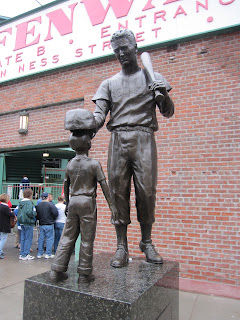 The Yankees crushed the Red Sox today.  The score was 14-3 and the game lasted about 5 hours (i.e. with an hour rain delay).  I'd been to Fenway before, so there wasn't anything I really wanted to check out.  I went to take a picture of the Ted Williams statue, but after that it was all business.
I took Ning with me to the game, since she's kind enough to host me in Boston this weekend and I was pleased to see that the seats we had were under cover.  ****  Ironically, the seats were in the same section as my crush of many years ~ WEIRD, but I digress...  It'd been raining all morning and I was almost certain that there would be a rain delay.  I was right.
In the 5th inning, one strike short of an official game, the rain started comng down.  ****  Incidentally all the songs that were played suddenly had a rain theme (e.g. Here Comes the Rain Again, etc.).  I had no idea there were so many of them.
Eventually the game resumed.  Whoever said that the Yankees and Red Sox games take a long time to play wasn't kidding.  This game was a marathon, but was exciting especially if you are a Yankees fan.  The game got away from the Red Sox and before you knew it, the Red Sox fans were leaving Fenway Park. 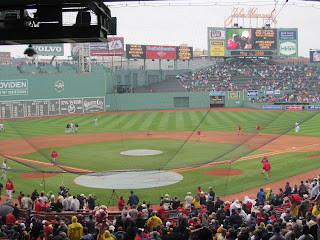 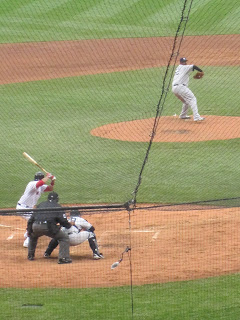 C.C. Sabathia on the mound 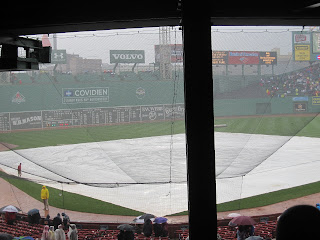 Bring out the tarp 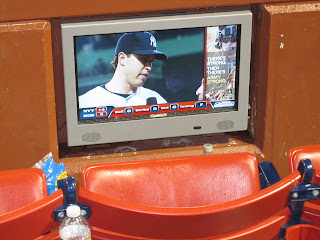 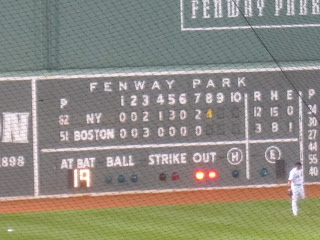 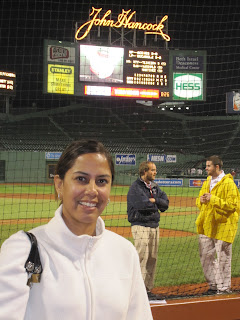 Of course I ate at the game.  I had a Fenway Frank, and it was good.  I was pleased that the hotdog was longer than the bread, since it's a pet peeve of mine when there is too much bread.  The bread was like a slice of white bread, and it tasted the same way.  Simple (i.e. which is good).  I also enjoyed a slice of pizza from Paga Gino's, and the crust was nice and crispy.  With the game lasting as long as it did, I needed to eat!

****  I was pleased to see that Fenway Park serves Legal Seafood clam chowder.  I didn't have any, but it is a favorite of mine.

One more thing, and I don't know why I didn't think of this earlier, because it's obvious.  Tonight I noticed a mother/son, old lady/younger man combo in the stands and they were wearing designated driver wristbands.  Also, they were drinking sodas.  The lightbulb in my head clicked on!  When I showed the awkward "couple" to my friend the following converstion ensued.

Ning:  How do you get the wristbands?
Me: Well obviously you have to be a virgin....

OK. So that was a little mean, but it is funny.  In all seriousness, if you sign up to be a designated driver at most stadiums/arenas/ballparks for your group you get a free soda.  So, if you're trying to save a few bucks ~ there you go.
Anyway, that's all for now.
THE WIRK
Posted by THE WIRK at 11:44 PM