Long weekend in Las Vegas with my dad and friends 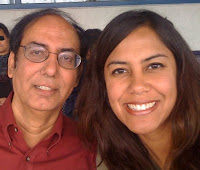 I spent the long weekend in Las Vegas with my dad and some friends to celebrate another friend's birthday.  It was a fun time and I especially enjoyed the time away with my dad who I haven't seen since last Christmas.  The craps tables were lucky for me and the sports book was good to me also! 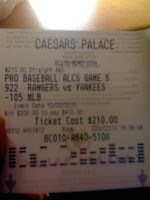 I bet on the New York Rangers to defeat the New York Yankees in Game 6 for the ALCS.  That's right, I bet againt the Yankees.  What can I say?  I just might want to go back to Dallas after all.
As for my other sports action, I had the Patriots +2.5 over the San Diego Chargers.  I took the money line on the Pittsburgh Steelers over the Miami Dolphins.  All winners.  It would've been even prettier had I hit my 2 team parlay (i.e. San Francisco Giants and Oklahoma), but the Sooners just couldn't pull through for me.  I lost a heartbreaker when the Vikings lost to the Packers, but what a game that turned out to be!  C'est la vie.
I don't normally play the fire bet, but I did see a man make 5 original points.  That was definitely interesting.  Wish I'd found his roll earlier.  ****  I checked on my dad at the craps table during half-time of the Steelers game, so we could have lunch. 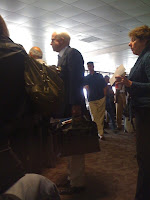 On the way back, John McCain was on my flight from Phoenix.  This is actually the 3rd time I've run into him, so the novelty has worn off.  However, this was the first time I decided to snap a picture. 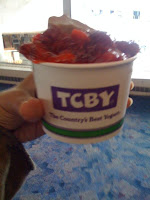 Regardless, the highlight of my return trip was the TCBY chocolate frozen yogurt with extra strawberry topping!  That stuff is so good!
THE WIRK (aka Pamphlet and WINNER)
Posted by THE WIRK at 11:47 PM