Brett Favre's voicemail or his 500th TD pass ~ What do you care about?

I don't know about you, but I don't want to hear every professional football player's inappropriate voicemail message nor do I really care about any inappropriate text messages.  I heard Favre's voicemail on Friday on the radio.  I don't condone infidelity, but I do think it's a personal matter between him and his wife.  Further, as long as there are no charges/convictions against him, I think it's a dangerous precedent for the NFL to "set" (i.e. to punish these types of behaviors as an offense to the code of conduct). 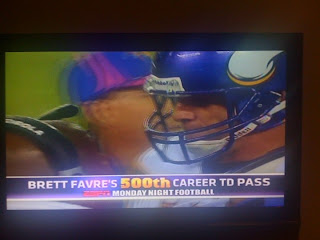 Now back to the business of the New York Jets v Minnesota Vikings, MNF match-up...  Congratulations to Brett Favre on his 500th career touchdown pass (i.e. of which  Randy Moss was the recipient)!  The Vikings are still down 7-15 with the 3rd quarter coming to an end...
Now that this blog post is done, I can start leaving inappropriate voicemails!  HAHA.  Just kidding.  Obviously, I need to order a voice changer first... Duh...  :-P
THE WIRK
Posted by THE WIRK at 11:37 PM