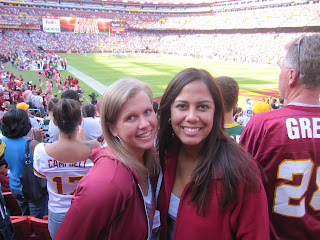 I'm not sure when it happened, but my friend, Kanak, has become a football fan.  She had tickets to the Green Bay Packers v Washington Redskins game on Sunday, and when I offered to sell them for her, she refused.  She said she wanted to go to the game.  When I picked myself off of the floor, I knew I was going to have to rally "early" (i.e. wake up in the AM) on Sunday and go with her.
****  Incidentally, the night before some guy took my cell phone home with him.  He said I dropped it.  I think he stole it.  Regardless, I offered him $100, if he brought my phone back to me before 10AM (i.e. he called me around 9AM).  For those of you that think that's a bit much, you have no idea what it's like to explain the situation to AT&T that your phone has been stolen and you want to replace it.  The amount of time and energy I'd waste to discuss this issue with those people, is far less than $100.
Kanak picked me up for the game, and we drove to her work and then walked to our friend JV's place.  The few blocks might as well have been a few miles, because I was in no mood for a Sunday morning stroll.  JV's sister drove us to FedEx Field.  I slept in the car on the way. 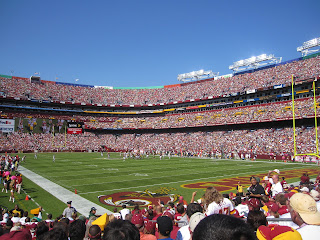 View from the seats
Entering the stadium with the game underway, I just wanted to sit and enjoy the game.  I honestly couldn't have cared less about the outcome.  It was a gorgeous day, and I was just excited to be around friends. 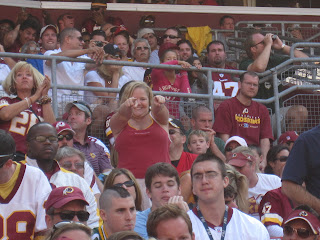 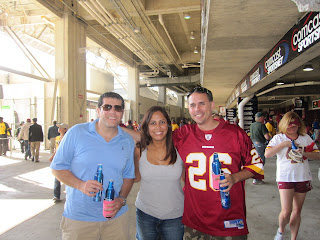 With Ari and Rod (aka "the Donkey") 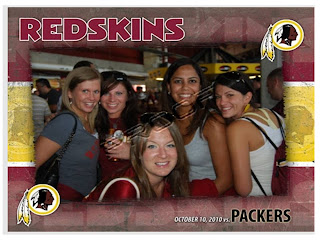 With my girls: Kanak, Taters, Marin, and Jena 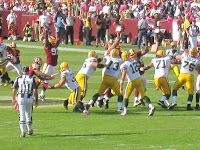 Kanak was asking questions throughout the game and following the action.  I haven't had to explain penalties (e.g. holding, offsides), football basics (e.g. downs, offense, defense), or that they're yelling "Coooooley" instead of "boo" (i.e. when Chris Cooley does something good) in a long time.  However, I couldn't help but notice that she's definitely been learning the game the past few weeks.  ****  Yes, Kanak, I was impressed. 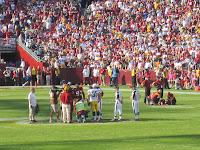 The game turned out to be a good one!  It went into overtime.  When Green Bay won the coin toss, I assumed that the Packers would win.  When I watched them miss the field goal, I was shocked.  Overtime was stressful, but ultimately the Washington Redskins defeated the Green Bay Packers 16-13, thanks to Graham Gano's field goal...
Sorry Packers fans.  You lose, and Aaron Rodgers has a concussion and may not play on Sunday.

I'll admit, I'm not really Redskins fan, but after that performance ~ Hail to the Redskins!

****  If you ask me, Redskins' fans should buy my tickets to go to all the games for the rest of the season, since the 2 games I've attended they've won.  If you don't remember, I was in Philadelphia last weekend.

Question:  Stadium dog for $6 or two hotdogs for $10?  Which would you choose?