Yankees rally in the 8th to defeat the Rangers ~ ALCS, Game 1 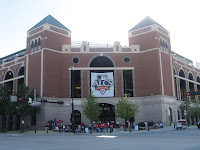 I'd never been to Rangers Ballpark so I decided that there was no better time to go then last night to watch game 1 of the ALCS.  I flew to Dallas and immediately went to see my family.  After catching up with Ashley, the kiddos, the new kitty, and meeting her neighbor Dave ~ they whisked me away to the game.  I got there early so that traffic wouldn't be an issue and it worked out well so I could eat and not worry about picking up my ticket at will call. 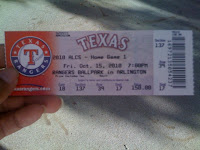 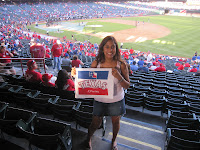 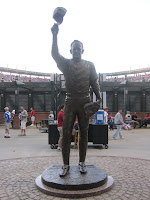 For under $20, I had a hotdog, a large drink, and a funnel cake.  ****  Funnel cake is one of my guilty pleasures!  After satisfying my inner fat kid, I walked the concourse to see what the park had to offer.   I found a large gift shop (i.e. the Majestic) and a huge Nolan Ryan statue.  After taking the obligatory photo it was time for me to get ready to watch the action.

Nolan Ryan threw out the ceremonial first pitch.  Here's the video I shot:
It was a comfortable 80-degrees, and I settled in my seat.  Before you knew it, the Texas Rangers were up 3-0.  I'd never heard the name Michael Young until yesterday, but after last night I won't forget it.  Evidently he lives down the street from my cousin.  At his first at bat, he singled and then next thing you knew Josh Hamilton drove him and Elvis Andrus home with a home run! 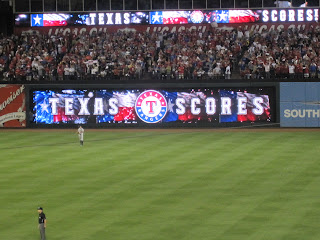 I watched game 1 of the ALDS and CC Sabathia got off to a slow start at Target Field (i.e. against the Minnesota Twins) so it felt like de ja vu...  CC managed to get himself out of some other jams, and before you knew it Joba Chamberlain was in the game, pitching in the bottom of the 5th.
Anyone else remember Joba Chamberlain on the mound in Cleveland when those flies came out?!?!  That's an image I can't forget!  So gross...
Around the time of the 7th inning stretch, I noticed George W. Bush in the crowd.  Here's a picture.  He's in the blue shirt, front row, to the left of the sign. 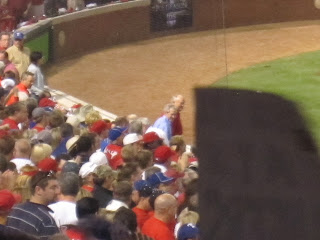 Anyway, some time around the 8th inning I noticed the guy to my right.  He was a cross between Rick Fox and another guy I grew up with (i.e. that I had a crush on).  Needless to say he was attractive and shooting pictures with a serious camera.  I found it all very interesting.  After some small talk, we both noticed the Yankees had scored!  Wouldn't you know it?  The Yankees were beginning to rally!  It was so quiet in the ballpark that it was as if the Rangers balloon had completely deflated, but thanks to some good conversation and Yankees offense ~ I was still smiling!
If you want the box score or a play-by-play check ESPN.com.  Great game and definitely a good time!  Rangers lose at home.  Final score Yankees: 6, Rangers: 5. 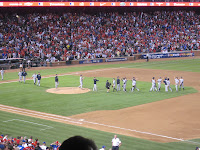 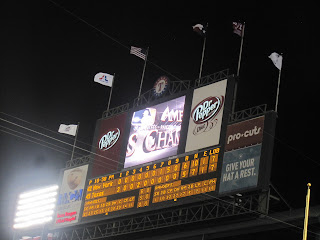