ESPN 30 for 30: Once Brothers ~ Politics, Friendship, and Basketball 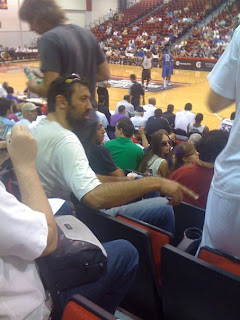 Tonight I watched the ESPN 30 for 30 "Once Brothers" feature and I have so much on my mind that I fel the need to post.  I saw Vlade Divac this summer in Las Vegas, when I was watching NBA Summer League.  I never thought I'd think twice about Divac this year, much less remember Drazen Petrovic.

Drazen Petrovic and Vlade Divac were friends and former teammates for "unified" Yugoslavia, but civil war between the Serbians and the Croatians divided them.  Other notables on that team are Dino Radja and Toni Kukoc.  I wasn't familiar with the specifics of Divac and Petrovic's relationship, until I watched this show.  I'm not Croatian nor Serbian, so I'm not very familiar with the history of the two countries.  I wasn't familiar with the incident that occurred in 1990 World Championships in Argentina (i.e. Divac's reaction to a fan approaching with a Croatian flag) when Yugloslavia defeated Arvydas Sabonis and the Soviet Union for the gold.

What I do remember are the Dayton Peace Acccords that happened in 1995.  I remember the news that the Presidents were meeting in Dayton, because those talks occurred only minutes away from the houses where I grew up.  I remember the Peace Accords put an "end " to the fighting between Croatia and Serbia.  Aside from integrating the political angles, it was enlightening to see the human story behind Divac and Petrovic's relationahip.

Divac was drafted into the NBA in 1989.  According to Wikipedia, "The 1989 NBA Draft has been regarded as one of the worst drafts in NBA history...  Though the draft produced talented players such as Shawn Kemp...eight of the top ten picks were considered busts, including the first two picks Pervis Ellison and Danny Ferry."  ****  HAHA.  Thank you, Wikipedia.

I don't remember Petrovic's entry into the league, but I do remember his premature exit from our lives.  I remember learning that Drazen Petrovic died in a car accident in Germany.  I saw it on the news.  I remember his star shining while he played with the New Jersey Nets.  He had so much promise and talent.  I remember feeling the loss, even though I wasn't a Nets fan.  In the ESPN feature they talk about Petrovic and how he had no problem going against Michael Jordan.  Petrovic had a quick release and ice in his veins.

Here are some clips compiled of Jordan and Petrovic that I found on youtube.

Petrovic and Divac's performances on the world's basketball stage and successes in the NBA helped to pave the way for other Europeans (e.g. Zydrunas Ilgauskas, Peja Stojakovic, Pau Gasol, Dirk Nowitzki) to enter the league.  Human relationships are tough at times, but when you add politics, friendship can often be strained.  They say never to talk about money, religion, or politics.  Politics can enter our lives in the most subtle of ways, but even the keen eye of someone "in the know" can discern the Serbian three-finger salute for what it is, as opposed to "just" a cheer after a 3-pointer is drained...  I remember watching a Sacramento Kings game in the late 1990s, where the salute was given after the shot.  I was watching with someone from Europe who knows basketball.  As soon as he saw it, he said "Whoa!".  What I thought was a simple celebration for a 3-pointer or a clutch shot, meant much more.  I had no idea what I saw meant more than it did, but he knew (i.e. that for some people) the message would be clear.

Don't believe me?  Seems as though he wasn't the only one who picked up on the messaging.  Here's one article I found on the subject:  http://www.newsreview.com/sacramento/content?oid=14137.  Nevertheless, I don't want to talk politics.  I do want to let you know though, that if  you haven't seen the ESPN 30 for 30, "Once Brothers", see it.

In fact, if you aren't watching these shows, you really should catch up and maybe even pick up the gift set.

Further, if you're a Drazen Petrovic fan, I just noticed that you can pick up his jersey.

**** Do me a favor, if you liked this post or any other of the posts in this blog, please go to the upper right hand corner of this blog and vote for me for Blogger of the Year. It only takes a second. Thanks!