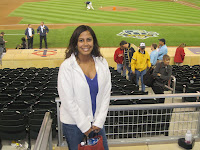 Last night was the first night of the MLB postseason.  I was able to attend Game 1 of the ALDS between the New York Yankees and the Minnesota Twins.  Earlier in the evening, baseball fans were treated to something special when Philadelphia Phillies' pitcher, Roy Halladay, pitched a no-hitter!
﻿
Wow.  Coming off watching the celebration in Philly, I was expecting big things at Target Field.  I didn't witness a no-hitter, but I did see a great game.

CC Sabathia and Francisco Liriano went pitch to pitch, but the bats were hot also.  10 runs were scored, but the Yankees ended up winning 6-4. 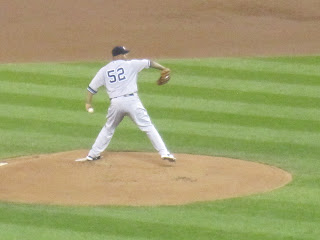 CC Sabathia on the mound 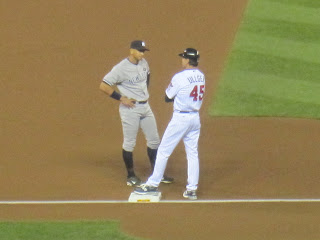 My 3rd base favorites, Alex Rodriguez and Scott Ullger 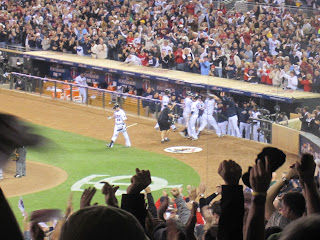 There was not a no-hitter to witness at Target Field.  In fact, the crowd seemed to "boo" a bit when Sabathia hit Thome in the arm with a pitch.  Come on, people!  That's no big deal.  Don't you know that that's how former Tribe players greet each other?!?!

In the bottom of the 6th with Sabathia loading the bases, I started to panic.  However, he was able to work himself out of the jam after only walking in one run.  Great. Game was tied at 4. 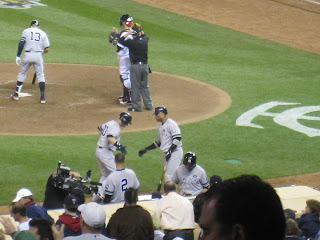 In the 7th, with Nick Swisher on base, Mark Teixeira hit a home run to put the Yankees up 6-4.  That would be the final score of the game!

Oh and  I have to mention that since Randy Moss returned to the Minnesota Vikings yesterday, it seems like the people in Minneapolis dusted off their Moss jerseys and decided to wear them to the game.  Welcome back, Randy.  Seems like Vikings fans can't wait to see you.


Fan of Teixeira?  Pick up a shirt.  Man his name is hard to spell...  "I before E, except when sounded like Teixeira"...