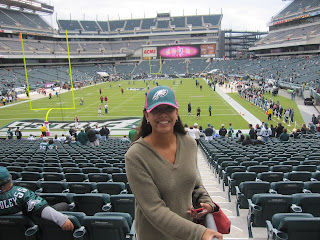 On Sunday, I went and checked off another stadium in my quest to hit them all.  I finally decided to hit Lincoln Financial Field to watch the homecoming of Donovan McNabb.  The Washington Redskins were in Philly to take on the Philadelphia Eagles and I wanted to also check out Michael Vick.

It hit me that it was homecoming weekend when I was at dinner with my friend Erika on Saturday night.  She'd missed my birthday and wanted to make it up to me, and I was craving Mongolian beef so off to P.F. Changs we went.  At the restaurant we were surrounded by kids that were dressed up to the nines and it hit me, that it must be "Homecoming" season.  Well, how appropriate that I'd chosen to go to Philly to see the Redskins v Eagles match-up! 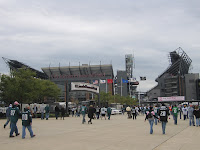 I hauled my lifeless body out of bed and drove to Philly.  It's an easy drive (i.e. about 2 hours) and by about 3PM (i.e. after paying $25) I was parked in a lot staring at Citizens Bank Park.  Immediately I was reminded that I needed to check and see what the National League Division Series match-up would be when I got home.  I've been hoping for a Cincinnati Reds v Philadelphia Phillies match-up so I can see the Reds easily.  Although, schedule permitting I do intend to go to Cincinnati and see the Reds at home...  Fingers crossed. 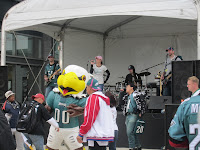 Upon entering Lincoln Financial Field, I noticed that the band Kristen and the Noise was playing.  Wow.  Feels like I never left the DC/MD/VA area...  I noticed that there were ladies selling hats and ties to benefit breast cancer awareness.  Alright, I wasn't planning on buying an Eagles hat.  I'll admit it right now, I'm not an Eagles fan and I dreaded going to the Linc because of the horror stories I've heard about Eagles fans.  However, breast cancer has affected my family and what's $25?  Wearing my new hat, I climbed the steps to the 100 level concourse and sent texts to my friends in the stadium.  After that I was starving and went straight to the concession stand and spent $13.50 on a Philly cheesesteak and a large diet-Pepsi.  When in Rome...

Before the game started, I was curious (i.e. along with everyone else in the free world) as to how Eagles fans would react to McNabb's return.  As he was introduced and ran onto the field, people stood, cheered, and clapped for McNabb.  There were some boos, but the cheers were louder.  Eagles fans were respectful towards him, and I was inpressed by their class. 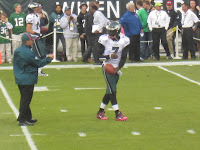 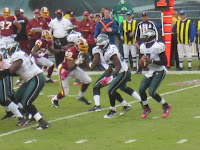 I used to live in Atlanta and at that time I have to admit, I became a bit of  a Michael Vick fan.  He made football exciting and was fun to watch.  So, I thought what better game to watch since he had been playing touch since the season began.  Well, in that sense, I'd be disappointed. I ended up watching for Kevin Kolb than I intended to since Vick left the game, sometime during the 2nd Quarter... 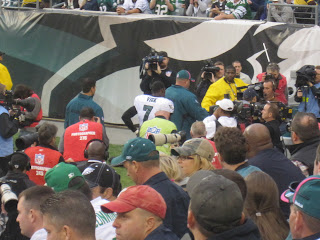 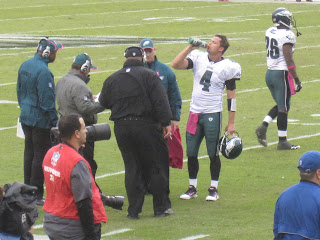 Kolb in the game 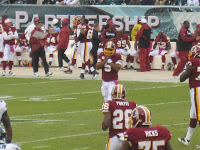 As the game went on, it seems like penalty after penalty was being called against the Eagles.  Needless to say the Eagles' fans around me were getting progressively annoyed.  With every false start, holding, and even horse collar call, the man behind me would yell towards the field, "Your mom holds/false starts/horse collars."  Ahh yes.  That's more of what I expected. 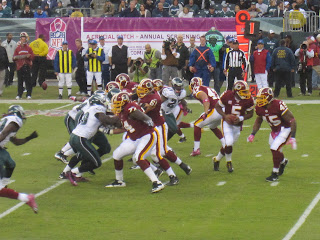 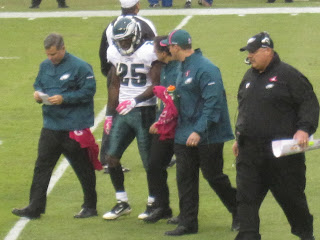 LeSean McCoy leaves the field
Here's one for you, as McCoy got up and walked off the field, the loud mouth behind me said, "Hey, McCoy.  Did Andy Reid promise you 2 vicodin if you got up?!?!"  WOW.  I have to admit.  That was funny! 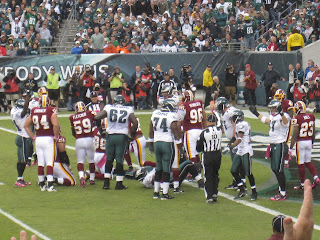 Eagles offense, so close yet so far away
There were some older ladies around me also and they were hostile when it came to rooting on the  Eagles defense (i.e. or lack there of), but this is football so I wasn't too surprised.  Aside from that douche behind me, the majority of fans were just fine.  Then agan, I did see at least 4 other occasions where someone was about to get punched.  Security seemed to be everywhere to handle and attempt to diffuse the situations "quickly".
It was drizzling during the game, and I was wearing my mini-skirt and Uggs.  Not the best choice, I've ever made, but I survived.  With about 5 minutes left in the 4th quarter I knew the Washington Redskins were going to win and I wanted to beat traffic so I bee-lined for the parking lot.  I'll admit, I also wanted to check out Harrah's in Chester on the way home.
I just need to see the Sixers (i.e. Philadelphia 76ers) play at home, and I can cross the city off of my list!  Time to check the schedule.
If you are an Eagles fan, and you want to help raise awareness for breast cancer here's a shirt for you.  It's a great cause.
THE WIRK
Posted by THE WIRK at 11:35 PM