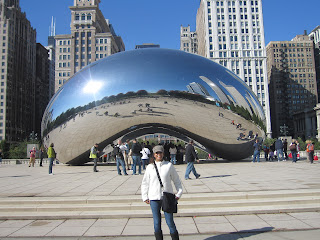 I've been to Chicago many times (i.e. I'm from the Midwest), but as many times as I've been to Chicago ~ I'd never been to Soldier Field. Well, finally, I did it! My friend Jason (aka Pork) used to live in DC, but went back to his home state to go to law school. Whenever I hit Chicago, I try to catch up with him because he cracks me up.

I met Pork at the Washington train stop and we walked to Soldier Field.  There was good weather in Chicago, and it was warm in the sun so the walk was easy.  On the way there I saw a street sign that read, "George S Halas Dr." so I knew we were getting close.  As soon as I saw "The Bean" I made my way towards it.  I wasn't leaving Chicago without a picture with it.

As we walked by the water with a bunch of other Chicago Bears fans, I forgot how much I enjoy Chicago.  Actually now that I think about it, I've never been to Navy Pier also.  Oh well.  Next time... 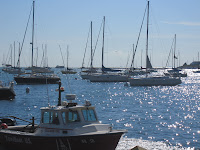 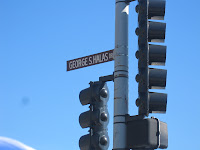 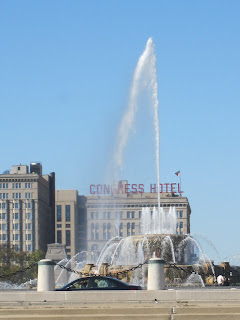 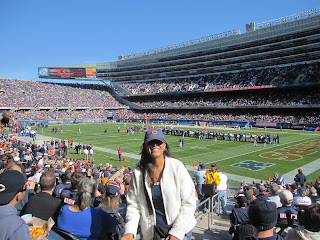 As soon as we arrived at the Stadium, I bought a Bears hat.  Hat in hand, we were off to our seats and I was ready to watch the Bears introductions.  The seats we had were fantastic!  You know the saying, "If you're gonna do it, do it right!"... 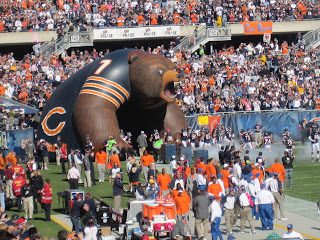 When the game started, of course I was snapping pictures.  I managed to catch the Bears first touchdown, when Matt Forte made it into the endzone.  It's a great picture, if I do say so, myself! 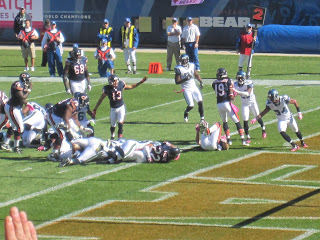 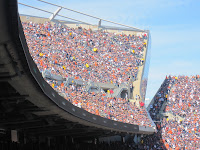 With the Bears in the lead, I started to look around the stadium.  Everyone who'd been to Soldier Field before me told me that the stadium looks strange now that they added the upper deck to it.  This was my first time at the venue, so I have no idea.  However, this is a picture of the upper deck of the stadium.  Can you imagine climbing all the stairs to the top?!?!  No...  That's not for me. It's way too high and way too scary for me to climb up there!
At half-time Pork and I walked around the stadium, so I could take some pictures. 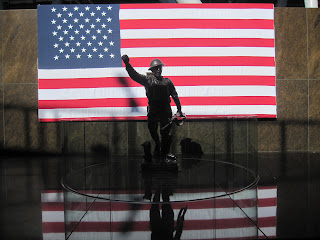 Spirit of the American Doughboy
Obviously there's a wall display for "Papa Bear Halas" too. 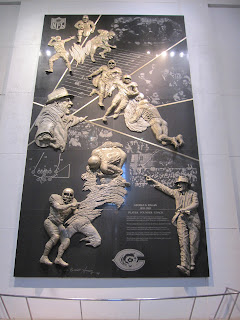 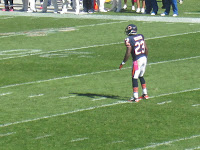 With the Bears down 10, Devin Hester gave the Bears a chance to tie the game, when he ran the ball back for a touchdown.  It was AWESOME, and the crowd (i.e. that didn't give up on the Bears and didn't leave early) was definitely treated to something special.  Devin Hester now has 13 touchdown returns, which ties him for the NFL all-time mark! 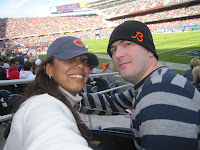 Great time at the game with my friend.  It was warm in the sun, but a little chilly in the shade.  I feel fine, but Pork has a cold now.  Sucks for him, but at least I was wearing layers!
Seahawks defeated the Bears with a score of 23-20.  Jay Cutler played, but it wasn't really anything to write about.  Hasselbeck led the Seahawks to the win.
Soldier Field ~ check.  Cross another stadium off of my list. 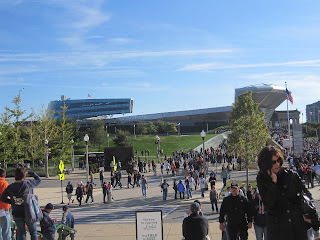 Fans leaving Soldier Field
THE WIRK
Posted by THE WIRK at 10:07 PM