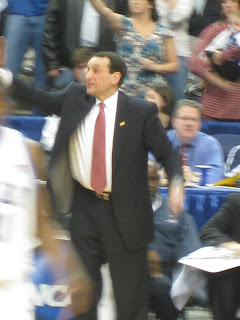 I wasn't fortunate enough to get into Duke University.  I interviewed and if I remember correctly, all I talked about was Coach K.  Tonight Mike Krzyzewski (i.e. yes, I had to google the spelling of his last name) scored his 880th career victory.  I didn't go to Duke, but my brother did.  He was there for 9 years as he pursued every degree he could before my dad said "enough already".

I've been to Cameron Indoor.  I've traveled to the NCAA tournament.  I've seen the ACC Championship, and I've been to many other venues to see Coach K do what he does best ~ COACH. 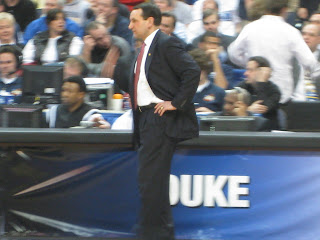 Tonight Coach K surpassed Dean Smith, who also deserves ultimate respect.  Coach K is now 2nd on the all-time career win list.  Bobby Knight is at the top of the leader board with 902.
I didn't watch the Duke game tonight against UNC Greensboro, but tonight was a great night for basketball purists everywhere.
You may not like Duke, but you have to respect what Coach K has done in international competition and as a professional.
THE WIRK
Posted by THE WIRK at 12:12 AM