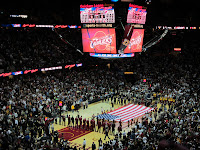 By now, you've all seen the lop-sided score from the Miami Heat v Cleveland Cavaliers game (aka LeBron's Homecoming).  The Cavs lost by 28 points.  While most hoped for a competitive game (i.e. and some even dreamed of the Cavs pulling the upset), the smart fan knew that these expectations were not necessarily reasonable.  I for one, wanted a competitive game.  I don't believe that Cleveland was so undermanned that they couldn't have put up a better fight.
I am from Ohio, and since I was in Ohio for family, I felt it was "meant to be" for me to drive the 4 hours up to Cleveland for the game.  I arrived at Quicken Loans Arena at 6:30PM just as the gates were opening.  By then the walkway from the parking garage and the entrance by the ticket window were packed with people.  With so many changes from last year, I was excited to see was a Danny Ferry-less (i.e. WOOHOO!!!) Cleveland Cavaliers' organization had to offer.  I couldn't help but notice that there were no pictures or images of LeBron, and that the only recent picture featured was of Zydrunas Ilgauskas.  Yep, they love him in Cleveland. 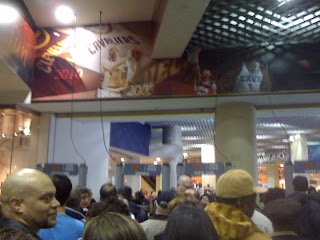 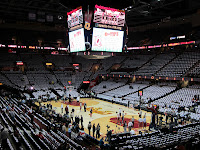 When I arrived at the Q, I was about 90 minutes early so it gave me time to look for and talk to my friends in the front office, walk around the concourse, and catch up with folks.  The Q (i.e. formerly Gund Arena) still feels like home.  It's Ohio.  People rarely change and some of those people I've know for over 10 years.
I saw camera crew after camera crew (i.e. local and national news media) interviewing Cavs fans.  When approached for a comment, I decline.  I have very strong opinions, and these feelings do not need to be aired on TV or radio.  I've been approached more than once (i.e. and I'm sure it's purely coincidental and/or random), and it always freaks me out.  As a rule, I told myself that I would never talk to the media when I'm in Cleveland. 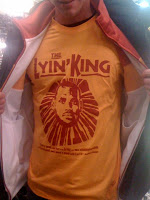 Regardless as the arena began to fill-up, I went to take my seat.  I saw numerous anti-LeBron t-shirts (e.g. Quitness, The Lyin' King) and they all made me smile.  People are pretty clever when given enough material to work with. 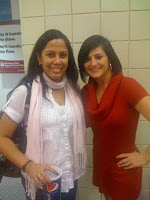 For such a big game, athletes and celebrities always come out.  Some notables in the crowd were: Bernie Kosar, Drew Carey, Josh Cribbs, Wally Szczerbiak, and Dominique Moceanu. 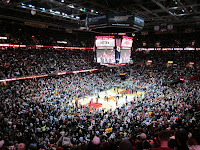 During the pregame shoot around and stretching I couldn't take my eyes off the opposite side of the court.  LeBron was getting booed every time his face was on the scoreboard.  Zydrunas was running up and down the court in a Miami Heat jersey.  The normal pre-game images I have in my head of the Cavs's Strength and Conditioning Coach and Zydrunas' good friend) stretching Zydrunas at half-court were not happening.  It was strange.  Instead, Zydrunas was running on the word "Cavaliers" on the arena floor, and I could feel the irony. 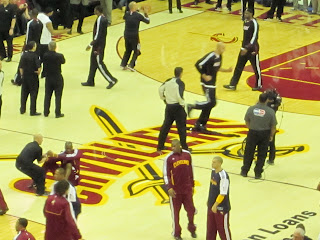 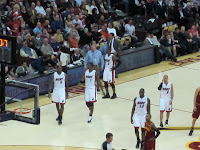 Nothing but the best in terms of security at the Q, I saw Rick (i.e. a familiar face) over by the Heat bench.  If Rick is over there, it's serious.  He's a professional and used to work the tunnels years ago.
As Cleveland Cavaliers' owner, Dan Gilbert, walked out into view to take his seat, the crowd went nuts.  He received a hero's welcome.  Say whatever you want about the rant in his open letter.  Unless you're from NE Ohio, drank the LeBron kool-aid, believed in all the promise of the franchise, and the hype  ~ you will NEVER understand, because that open letter was not intended for you.  Dan Gilbert was the only person who who could speak for the thousands of people in the region and be heard by the world.  I actually admire him for having the strength (i.e. read "balls) to do it and not enable (i.e. any more).
Here's video of the crowd's reaction to Dan Gilbert heading to his seat.
The pre-game introductions started and LeBron is booed.  That was to be expected.  Next Zydrunas was introduced and the crowd goes wild.  He will always be highly regarded in Cleveland.  They love him there.  I lost count of the # of surgeries, but his struggles have been well-documented.  ****  It's ironic in a way that I had my mom's surgical procedure earlier in the day.  I know I waited nervously for at least 2 of them.  The last time I had been in a waiting room for a surgery was Zydrunas' last, successful foot operation in Baltimore.  For those of you that think Greg Oden is a bust.  I know from experience.  Don't count an athlete out until he/she retires (i.e. for good).
Here's the video of the introductions.    The visuals leave a lot to be desired.  I guess I was shaking.  The audio is priceless. 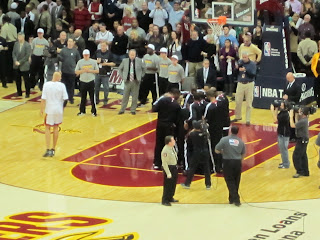 After the Heat intros Zydrunas left the huddle too early.
and had to double back. If you ask me, it's symbolic. 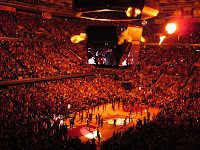 The Q's lights dimmed.  When the Cavs did their introductions the fire came out of the scoreboard.  The crowd was literally fired up.  People were excited.  I had a sick feeling in my stomach.
The question of the day was whether LeBron was going to do his pre-game ritual of throwing the chalk/talc/powder into the air.  Yes, he did it.  Yes, the girl next to me yelled obscenities at him as the "dust" began to settle.  If 20,000 plus people thought they could've gotten away with it I would've pictured them storming the court because as far as they were concerned, it was "ON". 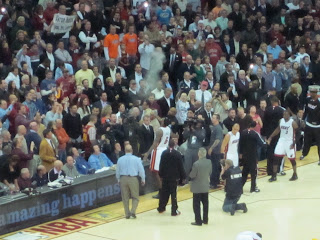 Do you see the dust/chalk/talc/powder in the air?  LeBron did it.
As Zydrunas took to his spot at the center of the floor to ready himself for the opening tip, I began to feel sick.  It all just seemed so wrong.  I watched as he greeted former teammates.  Fist bumps, guy hugs, etc.  I don't know anyone on the Cavs anymore.  Sure I know the names, but without taking a hard look at the roster I don't think I've ever spoken to any of the remaining players.  The link I have to the team was wearing the opposing team's jersey and the only Cavs people I know in the organization are in the media, broadcasting, front office, or other arena staff.  Finally, for me, the entire team has turned over...  It took 12 years. 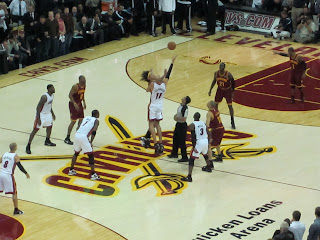 The opening tip happened and at that point I realize I need to root for Antawn Jamison, Mo Williams, Boobie Gibson, and Anderson Varejao in order for the Cavs to win.  Wow.  I don't think I can do that, EVER.  I texted my friend Trey, that I couldn't believe that I had to cheer for Varejao.  ****  I still remember Varejao having the ball at the end of one of the home games in Cleveland, when the Cavs were in the NBA finals against the San Antonio Spurs.  20,000+ people yelled, "Give it back!!!" when they could tell that he was actually going to take the last shot.  I have nightmares about that story. 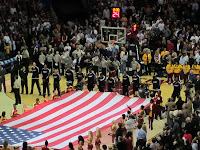 The first quarter was the most competitive and when the Cavs showed the most fight.  If you want numbers check the box score on ESPN.com or NBA.com.  I'm too drained to look at numbers.
Each time LeBron touched the ball, there were boos.  Chants such as "De-lon-te" (i.e. a reference to the Delonte West scandal) and "Akron Hates You" rang out through the arena.  When they showed a close-up of his face as he was shooting free throws among the chants, LeBron was smiling smugly.  I don't believe that it didn't affect him.  Sure it didn't hurt his game.  He scored plenty of points and the Heat won.  However, let's not forget that this is still a guy who when the going gets tough ~ runs to his mom. 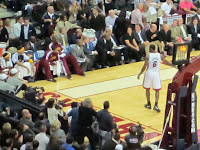 I wish the Cavs had played with the same intensity as the crowd.  Towards the start of the 4th quarter which began garbage time since the Heat had a huge lead, you could tell that the crowd had had it.  LeBron was talking to the Cavs bench and an assistant coach even told him to "Shut the f*ck up."  Don't believe me?  Google it.  Before the start of the 2nd half, it looks like Mo Williams to go f*ck himself?  Don't believe me about that either?  Google it. 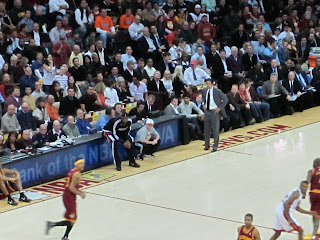 LeBron waiting to check into the game. Spoelstra coaching.
LeBron wouldn't play the 4th Quarter.  He didn't need to.  ****  WOW.  I just checked the box score.  Did you know that Zydrunas didn't take a single shot against the Cavs.  ZERO field goals attempted in almost 17 minutes of action, with only 2 rebounds.  I have an opinion on this, which I will keep to myself.  However, those numbers send a statement.
For the record, They flashed a sign on the scoreboard.  The sign read, "We're down 25, but we still have more fans here".  My guess is that the girl's sign was alluding to the fact that at least Cleveland fans care about the game and team more than fans in Miami.  ****  My brother lives in Miami.  He travels a lot and gets asked all the time what people think about the Heat record.  He said he tells them the truth.  No one cares.
People in the stands were throwing beers at an obnoxious guy looking to get beat up by obviously taunting and waving LeBron's Heat jersey.  A man was being escorted out and then decided to turn around and try to fight the people assisting him to exit.  A melee broke out and a few people got on top of him to get subdue and get him out.  I watched him as he fought and hit the floor.  I only caught the later part on video.  Supposedly there was only one arrest at the game.  My guess, is that it was that guy.

Here's the video I shot of the man being subdued.  I missed shooting when he turned around, resisted, fought, and knocked over the trashcan, but I saw it.

The game ended and the city was quiet.  Sure some people were out, but it wasn't a lively scene.  People seemed angry still.  I read an article or a tweet earlier today and the author asked if Cleveland can begin healing now.  My best guess is, "Not yet."
From the look and sound of it, Cleveland and I are not ready to "make nice" with LeBron yet.

Before the season started, everyone knew that last night's game was probably one of the most important games of the regular season.  Of course I'm happy that I went, but I'm also thankful that it's over.  If you ask me the Cavs stopped playing after the first quarter.  The Cavs should've played LeBron tougher and more physically.  The Cavs should've made their shots.  The Cavs should've stopped jawing with him from the bench and made their game speak for itself.  Could've, should've, would've ~ but didn't.

I doubt you'll see me in Cleveland for another Cavs game this year.  Byron Scott has his work cut out for him.  I wish him the best.  :-P