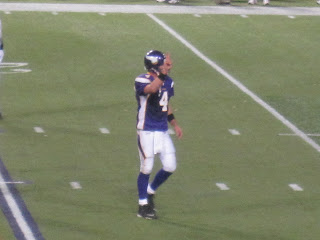 Brett Favre's $50K fine (i.e. ESPN says it's, 5% of 1 of his game checks) for not being "forthcoming" is weak and stupid.  Why did the Commissioner Roger Goodell even bother?  Favre is going to retire anyway.  Good for Brett.  If I was him, I'd rather pay the NFL's "token fine" and keep my mouth shut.

I'm happy that he let the system run it's course rather than strike some sort of financial deal with Jenn Sterger.  Who cares anymore?  This all happened years ago, right?  If Jenn Sterger really wants "justice", she should use the legal system and not depend on Roger Goodell to hand out penalties.

What I want to know is how many pairs of Wrangler jeans, Favre has to sell to make $50K?

To paraphrase Field Mob and Ciara, "He said/she said/they said/I heard... So what..."