Knicks defeat the Bulls on Christmas Day at The Garden 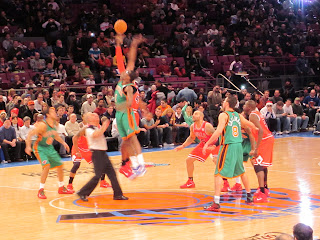 Today I went to Madison Square Garden for my first New York Knicks home game.  The Knicks were hosting the Chicago Bulls and my seat for the Christmas Day performance was SICK!
I was sitting about 5-6 rows behind the Chicago Bulls bench.  Don't get me wrong...  When I don't have a horse in the race, I have a tendency to root for the home team.  As a girl who adopted the Knicks as her team (i.e. when Patrick Ewing was drafted), I also had reason to root for the Knicks. 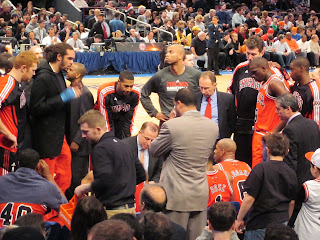 Earlier in the week Charles Oakley was named to Paul Silas' Charlotte Bobcats coaching staff, and I received a free pass to not have to go home to Ohio for Christmas.  Soooooo, of course I took it as a sign to go to New York for the day and watch the Knicks at home. 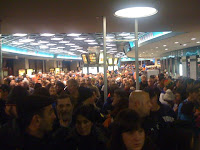 I decided to take the train, since Amtrak dropped me right off at Madison Square Garden and I didn't want to risk driving in holiday traffic.  The game tipped off at 12 noon and I arrived at The Garden with about 80 minutes to spare before the opening tip.  People were arriving early.  Before 11AM, when they started to let people in the entrance was packed full of people standing shoulder to shoulder.
As I walked in and went to my seat, I started to take in The Garden.  Yeah, the Knicks game was a sellout and you could tell that the Knicks fans were ready to battle.  There were a decent amount of Bulls fans in the stands, but they even seemed to be cheering for the Knicks here and there. 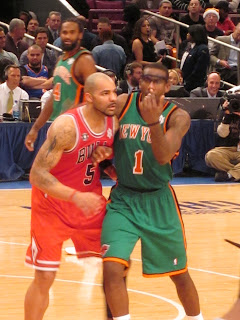 Another thing that was strange.  The Knicks were wearing green uniforms...  Yeah, I get it.  It was a decision to make the game appear more festive for the holidays (i.e. green for the Knicks, red for the Bulls).  Admittedly, as a "basketball purist" I thought the green was corny. 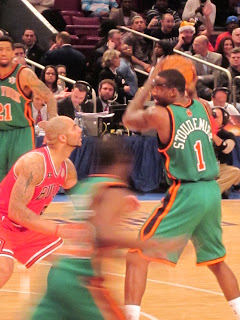 Today's match-up was a high-flying, physical game and I was excited to see Amare Stoudemire perform with his "new" team.  Amare delivered 20 points, 10 boards, and 6 blocked shots.  For those of you that think Amare doesn't play defense, he did his best to show you what he could do today.  For all of you doubters, that was your Christmas present. 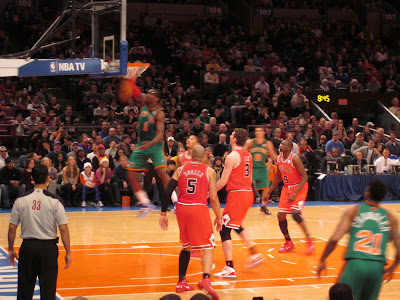 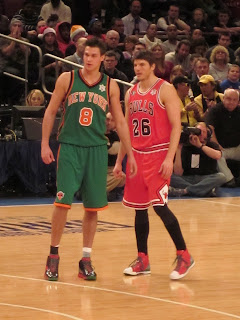 Since I was at the game, I wasn't paying attention to numbers.  I had to check the box score, but here are the details.  Raymond Felton came up big with 20 points and 12 assists.  Danilo Gallinari was not to be ignored, since he hit 75% of his 3 point attempts and finished with 15 points.  Wilson Chandler also dropped 15 points and gathered 10 boards.  The Knicks were balanced and earned the victory.
The Bulls were without Joakim Noah, but Carlos Boozer and Derrick Rose came up strong.  Boozer dropped 26 points and grabbed 19 rebounds.  Rose had 25 points and 8 assists.  I took another look at Kyle Korver, and I still think he resembles Carrot Top. 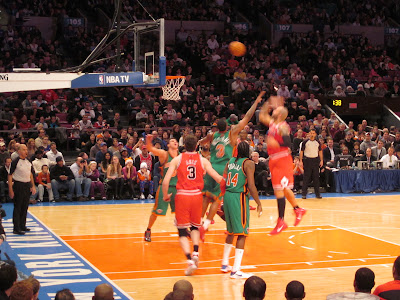 Boozer looking light as a feather
The Knicks ended up winning the game and defeating the Bulls with a final score of 103-95. 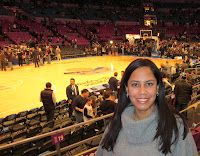 I can cross Madison Square Garden off of my list.  By the way, parents please listen.  If you bring your child to a basketball game, please make sure the kid either wants to be there or is old enough to tolerate being there.  I was sitting next to a kid who screamed, "I want to go home!" for most of the 3rd quarter.  This wasn't pleasant for anyone in earshot, and believe me ~ this kid had a set of lungs!
Thanks to Amare Stoudemire's effort, the "Christmas" party at The Garden was also a "block" party!  Enjoy the pictures from the game. 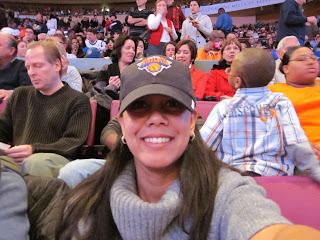 ****  Oh and did I mention that David Kahn, President of Basketball Operations for the Minnesota Timberwolves was sitting behind me during the game?  Maybe it's something.  Maybe it's nothing.  It is interesting though...
THE WIRK
Posted by THE WIRK at 12:00 AM