If you're a Minnesota Timberwolves fan, tonight's final score against the Denver Nuggets doesn't tell the story.  If you weren't at the game, chances are you didn't see any of the action.  The Denver Nuggets defeated the Minnesota Timberwolves 119-113.  This was a very winnable game for the young Timberwolves, especially since Carmelo Anthony wasn't playing tonight.  ****  Carmelo's sister died last week, and he's expected to return to his team for Thursday's game. 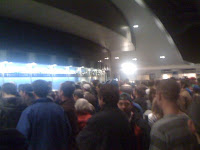 Wednesday night is college night at the Target Center.  I'm not really sure what the promotion is, but I can tell you that the place fills up and that there were tons of people at the ticket window before the game.  It was an orderly scene, but surprising enough to me that I took a picture. 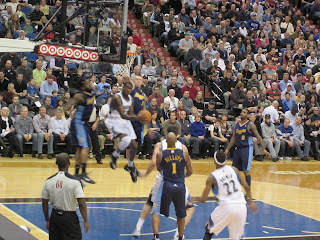 Ticket in hand, I was ready for the action and to see a great game. Do you know the name Martel Webster? I didn't. He's #5 for the T'wolves and he spent most of the game draining shots and/or in the air. Seriously. The kid blew up for 17 points. I had to Tweet @jonahballow during the game to figure out where Webster went to school. Turns out the kid came out of high school and spent 5 years in Portland. Wow. Never heard of him. My guess is that he played behind Brandon Roy or Andre Miller. No clue before, but I'll remember him from now on.  Here's a picture of him. in the air, going to the hole.  Yes, Webster can fly!
Darko.  OK.  I've never been the biggest Darko Milicic fan, but I'm also not a Darko hater.  I don't understand all the emotion people have about him.  It's not like the guy leaves any sort of impression.  Regardless, no one likes to see anyone get hurt  ~ but Darko left the floor twice tonight.  Once with about 6 minutes left in the 2nd quarter and again in the 3rd.  When he left the first time he didn't even make it back to the bench.
This is a picture of Darko being "aggressive on offense".  Intimidating, right?!?!  ****  Sorry, that's sarcasm. 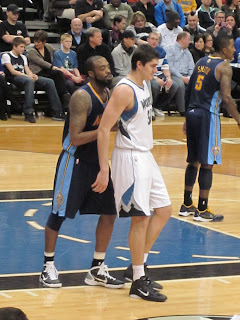 These are pictures of "hurt Darko"... 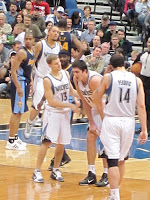 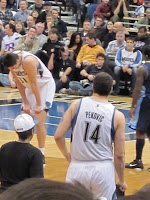 In the first one, he's bent over getting replaced by Pekovic.  ****  I'll keep my comments to myself.  Milicic or Pekovic...  Which one would you choose?   Like I said, when Darko got hurt it took him a while to get off the court.  In the second picture, Ridnour went over to check on him.  In the third picture, finally he was able to walk off the court, towards the scorer's table before heading to the locker room.  As he "walked" off the court, it looked like he didn't want to put any weight on his left side.  I think I heard it's a hip contusion.  I have no idea why he even came out to play in the 3rd quarter.  He winced every time he moved. 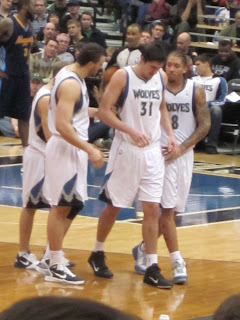 Enough about all that... 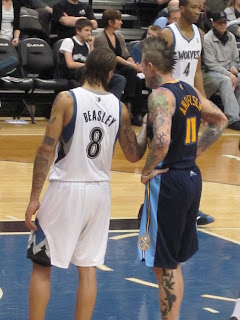 Michael Beasley did his best to keep the Timberwolves in the game and every time the whistle blew (i.e. down the stretch) if you thought the foul was on Kevin Love, you were probably right.   Beasley had 33 and Love had ANOTHER double-double (i.e. 26-14). 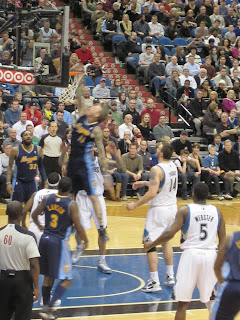 Chris "Birdman" Andersen was great to look at with all the tattoos and played a physical game with Love down in the post.  Plenty of contact and banging on defense.  Wish more guys in the NBA were willing to play defense...  Here's a picture of the Birdman getting some air.  ****  Ironically, he'd miss this shot/dunk... 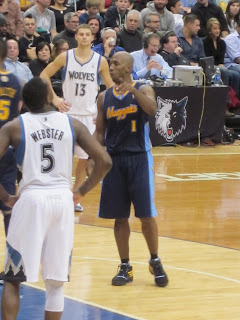 During the game a kid (i.e. about 7 years old) a few rows behind me yells, "Chauncey (Billups) you're old!". Thanks for the news flash, kid. He knows it. We all thought it. If anything all you did was motivate Billups to play out of his mind and drop 36 tonight. **** Nice job, kid... Next time why don't you heckle a guy who isn't a 5-time NBA All-Star and NBA Champion...

I was so into the game, I even reached out for a flying T-shirt.  ****  Don't worry.  It's not like I got ahead of myself and stood up or anything.  At the game I ate skittles, a cheesesteak, and peanuts.  I washed it all down with Mountain Dew.  Yeah, it was one of those nights...  I've got a sugar high or maybe I'm just still on the adrenaline high from this very winnable game, for the young Timberwolves.... 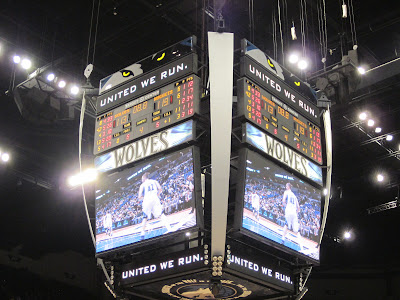 8.8 seconds left in the game
If only the Timberwolves had Reggie Miller last night...  He could have scored 8 points in 9 seconds!
Here's another random one for you.  Is this Minneapolis' version of the Kardashians?!?! 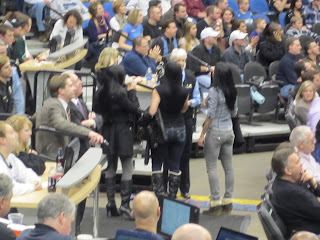 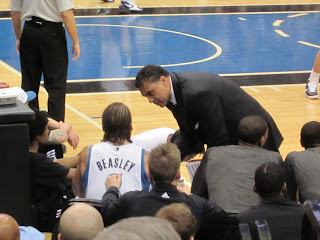 ﻿I've always said that the Timberwolves have a great mentorship program.  By having Kurt Rambis, Bill Laimbeer, and Reggie Theus on the bench coaching these young guys, I think there's a lot of potential in Minneapolis... 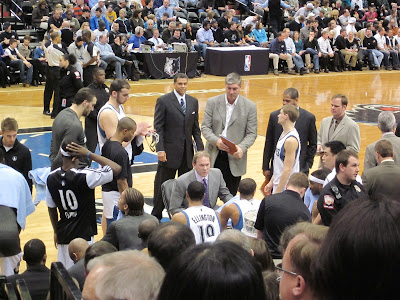