Tonight I had a choice between the NBA and the NFL, and I'm beginning to think I chose incorrectly.

Rather than go watch the Minnesota Timberwolves host the New Orleans Hornets (i.e. for some I guess this match-up could be described as "contraction v contraction"), I decided to stay in and watch the New Orleans Saints play the Atlanta Falcons...  Is it just me or is this MNF game boring?  Don't get me wrong, it's a close game (i.e. Saints are up 10-7) with about a minute left in the 3rd Q ~ but for me, it's not that exciting and based on the Tweets I'm reading, I'm not alone in my feelings.

The Timberwolves on the other hand apparently dominated the Hornets.  I'm going to say "apparently", since tonight's ~ actually I think most, Timberwolves' games aren't televised locally here in Minneapolis.  I'm just going by the box score.  Hornet's star Chris Paul dropped 22 points and had 13 assists.  David West, a Xavier alumnus, had 23 points in the losing effort.

****  Once when I was in Vegas, there were a few guys arguing.  They were sitting in front of me. One guy said to the other, "I bet she doesn't know."  Then they all turned around to look at me, while one of the guys asked me where David West went to college.  In no time at all, I said, "Xavier".  One guy started yelling obscenities, and the other guy started yelling that he wanted to get paid.  Evidently I settled a bet.  Guys, don't get it twisted.  I know sports.  Plus, I was sitting in a sports book, and I'm from Ohio.  Of course I knew David West went to Xavier University.

For the Timberwolves, Beasley dropped 30 points and Kevin Love had another double-double (i.e. 16-11).  Wesley Johnson scored 24, but I'm not even going to fake like I know anything about him.

Since scalping is legal in Minneapolis, I debated on going to the game tonight.  I remember when the Oklahoma City Thunder was in town and there was a "homeless" guy trying to sell me a corner, lower bowl ticket for $10.  I ante'd up for a better ticket with a better view, since sometimes it's not always about a bargain.

With Chris Paul not performing as well this season as in previous ones, I wasn't overly-excited about trying to go to the basketball game.  I determined that I was comfortable spending $10-20 on a lower level ticket, but ultimately decided I didn't have the strength to walk over to the Target Center and negotiate.  ****  I'd be willing to bet I could get a good seat at that price for that game. 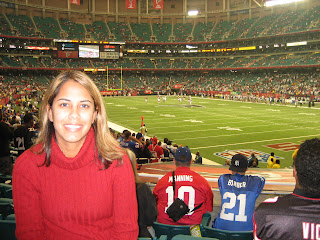 ****  I used to live in Atlanta, but haven't actually been to a Falcons game in years (i.e. since the Michael Vick era ended).  That reminds me, in 2005 the Falcons hosted the New York Giants.  As I was waiting to go through the turnstile I noticed Evander Holyfield.  For those of you that don't know, he lived/lives in Atlanta.  From what I could see, Holyfield was denied entrance into the Georgia Dome.  Maybe it has something to do with the fact that it looked like he didn't have a ticket.  I SWEAR.  Can't blame the guy for trying, I guess...

Update:  Yes, the 4th Q was worth watching.  The New Orleans Saints defeated the Atlanta Falcons 17-14...  Turns out, I did the right thing after all, by staying in.